Considering the series has been directed by British-Pakistani filmmaker Asim Abbasi who helmed the much-acclaimed drama Cake, the series has a good buzz which has resulted it to become popular on piracy mediums. 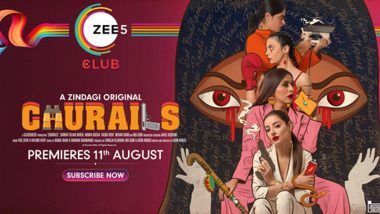 Zee5 recently announced five original series from Pakistan to be released on its streaming platform. One of them has been the Asim Abbasi directorial Churails. Churails is one of the first projects for Zee5 as Zee revives Zindagi channel that was known to air TV shows from Pakistan in India. The web series features Yasra Rizvi, Nimra Bucha, Sarwat Gilani and Meher Bano in lead roles and the show is now streaming on Zee5 in India. The show revolves around four women who run a detective agency. Considering the series has been directed by British-Pakistani filmmaker Asim Abbasi who helmed the much-acclaimed drama Cake, the series has a good buzz which has resulted it to become popular on piracy mediums. Bulbbul Full Movie in HD Leaked on TamilRockers & Telegram Links for Free Download and Watch Online.

Search engine platforms are currently goaded with keywords like Churails Series Full HD Available, Churails download on Filmysilla, Churails TamilRockers download and more and are reportedly available in 1080p HD, 480p, 720p as well as in cam-rip versions. The web series has received positive reviews from critics too which has made audiences even more eager to catch this show.

Unfortunately, the digital medium has also fallen prey to the evil menace of piracy like theatrical releases have been since several years. Piracy is a huge threat to the business of films and shows and must not be encouraged or justified. A permanent solution to put a full stop to piracy is yet to be put in place. LatestLY highly condemns these piracy acts as it affects the business of a project adversely.

(The above story first appeared on LatestLY on Aug 11, 2020 01:12 PM IST. For more news and updates on politics, world, sports, entertainment and lifestyle, log on to our website latestly.com).