The letter states that the government has instructed the bank to stop all the modes of payment for subscribing Indian content in Pakistan including Zee's video-on-demand service. 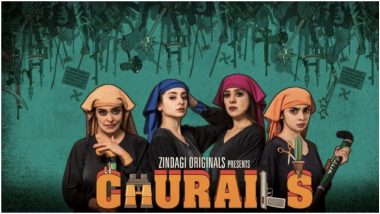 The Pakistan Electronic Media Regulatory Authority had earlier banned Zee5's much-acclaimed show, Churails in their country. The debate here was that the show's content was categorically vulgar and not appropriate for their culture. The debate around its content started after a clip of Sherry, played by veteran actor Hina Khawaja Hayat, talking about a sexual act and how she had to give sexual favours to get a job went viral on the internet. Churails Review: Zindagi’s New Pakistani Series Is Binge-Worthy for Its Plucky Attitude and Performances.

The decision to ban Churails faced severe opposition from many Pakistani celebs who tagged the move as a major hurdle in women's empowerment movement. Besides banning the show, the Pakistani government is now trying to block Zee5 subscription and a bank letter concerning same is now going viral on the internet. The letter states that the government has instructed the bank to stop all the modes of payment for subscribing Indian content in Pakistan including Zee's video-on-demand service.

Banning 'Churails' seems to be the biggest problem of the govt. Now subscription of Zee5 blocked in Pakistan. pic.twitter.com/JGOpD1n9TA

Churails' director Asim Abbasi had earlier expressed his disappointment on the show getting banned in a series of tweets. "How strange for #Churails to be lauded internationally, and now be shut down in its country of origin. In the very country where hundreds of artists came together to create something that could initiate dialogue and open doors for new narratives," read one of his tweets.

(The above story first appeared on LatestLY on Nov 12, 2020 11:57 PM IST. For more news and updates on politics, world, sports, entertainment and lifestyle, log on to our website latestly.com).