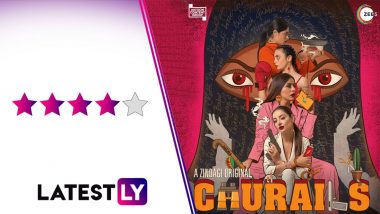 Churails Review: Zindagi, the new sub-section on Zee5 that offers Pakistani shows and web-series, has begun streaming its new original series, Churails. And what a thrilling show it turns out to be! Written and helmed by Asim Abbasi, Churails is an enthralling take on patriarchy, feminism, and lot more, but without the need to get into sermonising and also without the need to lose out on the entertainment factor. Churails: ZEE5 Announces First Pakistani Original Series; Asim Abbasi Directorial to Premiere on August 11.

Churails is about four women who come together to start an unusual business - a private, secretive investigative agency that ousts philandering men. It all begins when Sara (Sarwat Gilani Mirza), the wife of an affluent politician and a former lawyer, finds out her spouse isn't faithful. There is Jugnu (Yasra Rizvi), Sara's friend, who is a wedding planner losing her business to her gay competitors, and is an alcoholic.

While Sara and Jugnu are on the affluent side, we have Batool (Nimra Bucha) and Zubaida (Meher Bano) on the other end of the spectrum. Zubaida, who lives with her abusive parents and bully of a brother, is secretly training herself to be a boxer. Batool, who has been released recently from jail for the murder of her husband, is trying to rehabilitate herself back in the society that isn't so amnesiac.

Unexpected circumstances bring the four under one roof during one rainy night. Unable to handle the fact that her marriage was a sham (and encouraged by weed), Sara proposes the business idea of exposing unfaithful men. The other women present agree to it, Jugnu reluctantly so. They name their business 'Churails', which they run under the garb of a boutique shop. Churails: Pakistani Actress Nimra Bucha and Sarwat Gilani Have Their Say on the ‘Bitter-Sweet’ Indo-Pak Relationship.

The women also recruit other girls to help them in their operations, with two men - Dilbar (Sarmed Aftab Jadraan), Jugnu's right-hand man and Shams (Kashif Hussain), Zubaida's hacker boyfriend - also helping them out. What begins as private invigilation soon strays into vigilantism territory, and before you know it, murders and violence also begin to enter the picture. And yes, there is also a parallel timeline set in future, where some of team members are being questioned by the police with regards to an unknown crime.

My experience with Pakistani shows haven't been much, but Churails, even without the context of its nationality and my unfortunate lack of familiarity, surprised the hell out of me. It is tautly written and directed, keeps you engaged in every scene and has a fantastic set of actors, that goes beyond the main quartet.

There is a bit of Veere Di Wedding, there is a bit of Thelma & Louise and there is also influences of Steve McQueen's Widows. But Churails turns out to be its own feisty beast - assertive, suspenseful and also pretty bold! Well, you can't help but be impressed when the girls use burkha - a clothing often accused of suppressing the women of the community - as what is seen to be their superhero capes! Asim Abbasi (of Cake fame) is on a roll here!

Like I mentioned before, while the feminism and statements against patriarchy do come in the forefront, Churails goes beyond that. While the tone is feminist, it also depicts the consequences of feminism without a cause. As the Churails began their witch-hunt, they also begin to inadvertently expose the society's attitude towards homosexuality, racism, societal privilege, transgenders and more. It makes you realise that despite the years-long border tussles and political complications, India and Pakistan share nearly the same societal inadequacies. Especially when it comes to women. The second half of the series has a track that take potshots at people's obsession with fair skin!

All, smartly added in the narrative, without getting needlessly preachy. After all, the protagonists themselves reiterate that the reason why they are into Churails is because of money and creating self-dependence. Though, it evolves into something that goes beyond materialism.

The character evolution and the episodes of their investigation are quite enthralling to watch. Each episode gives us more backdrop not just of the main characters, but also of others around them.

The best character progression is that of Sara, from being a shallow, sophisticated housewife to the determined leader of her 'Birds of Prey', as skeletons also tumble from her own sordid past.

Watch the trailer of Churails:

At the same time, Churails doesn't always take itself seriously. There is plenty of humour, both black and clean, especially in the initial episodes. The self-aware tone of the show makes it even more fun to watch. There are a few Bollywood references to use, from the exhilarating use of Amit Trivedi's "Da Da Dasse" track from Udta Punjab to the sassy take on DDLJ's famous line, "Jaa Simran Jaa".

It isn't all just fun and frolic - there are some shocking imagery, including a fleeting, disturbing scene of cannibalism and a nightmarish sequence that shows disembowelment. The point isn't merely to shock, but to leave a lasting impression in the minds. There is also plenty of stylish flair in the visuals, thanks to Mo Azmi's lovely camerawork. Special mention also must be given for for the songs used in the background - enhances the sexiness of the series.

Speaking of the performances, Sarwat Gilani Mirza is formidable a Churails' de-factor leader, owning up the screen as her character should. Yasra Rizvi is a scene-stealer, possessing the sassiest of the lines and plentiful of F-bombs, but also shining in the more serious scenes. She reminded me a lot of Swara Bhasker, so if Bollywood ever wants to remake Churails, you know whom to cast for this part!

Nimra Bucha is fantastic as the stoic Batool, who wants to run away from her past but also seek something she had left behind. Meher Bano brings enough spunk as the rebellious, sharp-tongued Zubaida, who hates her name because it doesn't suit her personality. The supporting cast is also wonderful, with every actor standing out.

- The Writing and the Direction

- Lull in the Middle Portions

Doesn't matter which nationality you belong to, do have a blast with Churails. Slickly directed and smartly written, Churails impresses you with its plucky attitude, thrilling suspense and captivating performances. Churails is streaming on Zee5.

(The above story first appeared on LatestLY on Aug 11, 2020 09:30 PM IST. For more news and updates on politics, world, sports, entertainment and lifestyle, log on to our website latestly.com).