The grand finale episode of Dance Deewane 2 aired tonight (September 28) on Colors. The show was graced by special guest Priyanka Chopra Jonas. After she left, Salman Khan arrived on the show to promote Bigg Boss 13 and help Madhuri Dixit in announcing the winner, who was Vishal Sonkar. 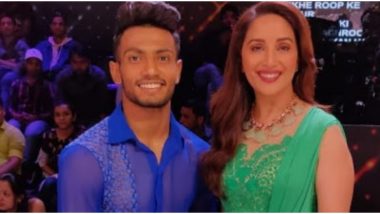 The grand finale episode of Dance Deewane 2  aired tonight (September 28) on Colors. The show was graced by special guest Priyanka Chopra Jonas, who was there to promote her film, The Sky is Pink. And not only that, Salman Khan was also present, to promote the upcoming season of Bigg Boss 13. Salman also helped Madhuri in announcing the winner, who was Vishal Sonkar. He was already announced to be the winner from Generation. The final tally was between him, Generation 3 winner, Mehul, and Generation 1 winner, Vihan.  Breaking the big mystery, it was announced that Vishal is the winner of Dance Deewane season 2. Bigg Boss 13: Salman Khan and Madhuri Dixit-Nene Unveil the First Glimpse Of the House on Dance Deewane 2 Grand Finale (Watch Video).

Vishal Sonkar is a young 23-year-old lad from Jamshedpur. A passionate dancer, he managed to make his way to the reality dance TV show. But to support his family financially, he used to odd jobs. Vishal worked as a delivery boy and gave it up to make a career in the field of dance, reports TOI. Seeing Vishal’s performance and his dedication in dance, filmmaker and one of the judges of Dance Dance Deewane 2, Shashank Khaitan, promised the young dancer to extend financial support. Shashank said he will extend financial support to Vishal so that he can get his mother treated who is suffering from arthritis.

It was quite a fun grand finale at Dance Deewane season 2. Salman Khan had loads of fun with the kids. He even arm-wrestled with Vihan. Twesha ended up crying on the stage because, she'd be missing her choreographer after the show. Salman joked around with her after she was consoled. Priyanka Chopra also got emotional after the show paid a tribute to the relationship with her father.

(The above story first appeared on LatestLY on Sep 28, 2019 03:23 PM IST. For more news and updates on politics, world, sports, entertainment and lifestyle, log on to our website latestly.com).