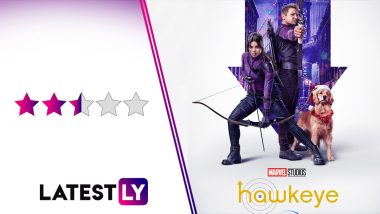 Hawkeye Review: Disney-Marvel continues to keep fans addicted to its brand now dropping the first two episodes of its new series, Hawkeye. You know, the same guy you would be pick last when you go for a Avengers cosplay. So the question here, will the new series make Clint Barton cooler? His skills surely have the potential to be so - see how DC Television turned Oliver Queen aka Green Arrow into the pinnacle of its Arrowerse - and Jeremy Renner is a fine actor. So it is quite a travesty that this Avenger had never managed to leave an indelible impression, apart from small bursts of interest. Hawkeye Review: Hailee Steinfeld Makes A Mark, Critics Call the Show MCU’s ‘Most Grounded Series’.

The only trouble here in this series is that it is not exactly a Clint Barton-centric show. Going by the couple of episodes that came out, this feels more a Kate Bishop origin story and Hailee Steinfeld who plays the role is an absolute treat to watch. Bechara Hawkeye, man is getting overshadowed even in his own show! Well, the ironical part is even his BFF got the same treatment when she finally got her own movie a few months back.

Hawkeye begins with a terrific opening sequence that kinda mirrors the opening scene of Batman V Superman: Dawn of Justice, showing the ground-level view of a climactic setpiece of an earlier Avengers film. Only in case of a young Kate Bishop, unlike Bruce Wayne had for Superman, she holds no murderous rage against Clint Barton whom she sees fighting aliens and even saving her life in the process. But the battle does take a toll on Kate's penthouse-living family.

Returning to the present timeline (or whichever future year MCU is now settling itself). Kate is now an accomplished archer, inspired by the man who saved her, so that she can prep herself up for any future threat. She drops in her home in New York, where she finds out her affluent mother Eleanor (Vera Farmiga) is going to marry a shady rich man Jack (Tony Dalton). From thereon, she stumbles upon a black market auction, some curious artefacts including a suit, a cold-blooded murder and a gang who has some scores to settle with  the previous owner of the suit that is now in her possession -  Ronin's.

Meanwhile, the former alter-ego of Ronin, Clint Barton is also in New York to spend time with his kids and enjoy the Christmas festivities. He isn't a totally happy man despite getting his family back from the Snap. He is hearing impaired and is still grieving over his best friend Natasha Romanoff's death. Clint is brought back into action when he sees Kate in Ronin's suit on television, and he is determined to find out what's going on.

After ditching the street-level action of Netflix Marvel series, Marvel decides to go back to the streets for this new series that also vibes in the Christmas spirit. Hawkeye is light-hearted and has a few fun moments, and a lovable doggy in the one-eyed Lucky.

It also establishes some interesting plot elements, like a murder mystery, the comical Tracksuits gang, Barton wanting to be with his family, and the final scene of the episode 2 introduces the gang's leader in Alaqua Cox's Echo (who later gets to have her own series).

When it ain't that interesting, there is Hailee totalling owning up the space and makes things watchable, while Renner looks very much subdued. Hope the future episodes makes the actor and his character open up more.

There are some intriguing doubts I have about Hawkeye, based on the episodes we have now. The series keep referencing the first Avengers movie, from the opening sequence to a really funny musical that strangely also includes Ant-Man into the fray (much to Barton's annoyance). But the Snap isn't mentioned here, though the series is definitely set after Avengers: Endgame (Thanos is mentioned a couple of times). So we are not really sure if Kate and her mother were also victims of the Snap. OTT Releases of the Week: Hailee Steinfeld’s Hawkeye on Disney+ Hotstar, Neha Sharma’s Illegal Season 2 on Voot Select, Nushrratt Bharuccha’s Chhorii on Amazon Prime Video and More.

Also I am not sure why Clint is surprised to see a 22-year-old vigilante in New York. Didn't he already fight against, and then along with, a high-school going superhero in Civil War and Avengers: Endgame? You know who I am talking about!

I might have not though too much about these questions, had the episodes been a little more pacy and give me lesser opportunities to rack up doubts, or for the matter, offer a more credible threat to the heroes. The first two episodes has taken leisurely route in getting Clint and Kate in the mentor-mentee mode, which in paper is good for their character development, but their scenes together don't really have the flair that they seriously deserve. As of now, save for the shadiness around Jack's character and the Tracksuits gang, who don't really look much of a threat, we don't really see an engaging enough foe for Hawkeyes in question. I am just hoping that the rumours are true, and Vincent D'Onofrio drops in as Kingpin. I also hope that the action choreography gets better too. Shang-Chi did spoil me there!

- Some Fun Visuals, Including the Opening Scene

- Slow-Paced and Takes Some Time to Set Things Up

I have to say that I am a little underwhelmed with how Hawkeye has started, occasionally fun, but little towards the tepid side of the action. Two episodes, however, aren't enough to judge the series, as I do expect things to pick up in the coming episode - Echo's introduction surely teases so. But seeing how WandaVision and even The Falcon and The Winter Soldier did better jobs at having impactful opening episodes, this is one bullseye that Hawkeye missed hitting out on. The first two episodes of Hawkeye are streaming on Disney+ Hotstar.

(The above story first appeared on LatestLY on Nov 24, 2021 04:46 PM IST. For more news and updates on politics, world, sports, entertainment and lifestyle, log on to our website latestly.com).