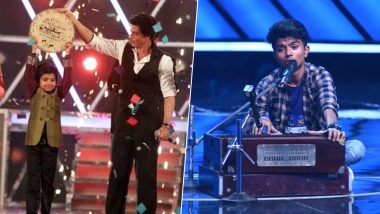 Indian Idol 11 has officially started on Sony Television and fans are already loving it! This year, the singing reality show is headed by the singers Anu Malik, Neha Kakkar and Vishal Dadlani as judges. The audition process is on and the fans keep discussing their social media on social media. However, one contestant who captured everyone's attention is Azmat Hussain. He is the winner of Sa Re Ga Ma Pa Little Champs Season 5 that aired eight years ago. He returned through this audition round, after battling depression and drug addiction. The mentors and the fans could not help but reminisce his old singing videos from the Sa Re Ga Ma Pa Little Champs 2011 show. Indian Idol 11: Azmat Hussain Who Won SaReGaMaPa Li'L Champs 8 Years Ago, Reveals Going through Drug Addiction and Depression - Watch Viral Video.

The judges were quick to recognize him as the former winner of the singing show. However, he revealed that he had quit singing due to drug addiction and depression. He also revealed that he was in a bad company for a while. Now, that he is back at taking his passion seriously, let us look back at some of his amazing music videos from the show that made him the winner.

The 10-year-old stunned the judges by his beautiful classical song from Guldasta. He also played the harmonium alongside that left the audience and the judges awestruck.

Watch This Song From Guldasta Here:

In fact, the boy hailing from Jaipur impressed the judges during the auditions itself. He sang a tough song like "Main Yaha Hoon Kaha Watan Mera" in this round.

The little boy brought singer and judge Kailash Kher to tears in one of the episodes. He sang "Naina Thug Lenge" from Omkara and set the stage on fire.

In one of the episodes, he sang "Saiyyan" originally sung by Kailash Kher. This left the judges emotional. Mentor Javed Ali advised him to just stay focused on music and nothing else.

These were some of the stellar performances of the young singer. He sure had lost his motivation for a few years. However, a talent like this cannot go waste at any cost. We hope that Azmat finds his musical path again and only gets motivated to do better.

(The above story first appeared on LatestLY on Oct 14, 2019 11:44 AM IST. For more news and updates on politics, world, sports, entertainment and lifestyle, log on to our website latestly.com).