Jennifer Winget Birthday Special: Interesting Facts About The Beyhadh 2 Hottie That Will leave You Amused

On the eve of the actress turning 35 years old on May 30, 2020, here are some fun facts about the pretty lady along with some really amazing pictures. 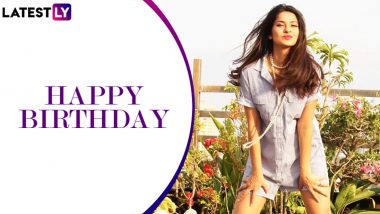 One can not stop raving about Jennifer Winget, her beauty, her style and the most important one... her craft. The actress started young in the acting field, having done roles as a child artist in movies like Kuch Naa Kaho, Raja Ki Aayegi Baarat among others. At the age of 16, she bagged her first role in the lesser-known show Karthika, where she played a singer. However, her big break and recognition came in the form of Kkusum when she was 16. Winget then played Sneha Bajaj in Ekta Kapoor's first Kasautii Zindagii Kay and became a household name and ever since there has been no turning back for the beauty. Jennifer Winget's Throwback Monochrome Photoshoot Showcases Her Quarantine Moods And It's Sexy AF (View Pics).

On the eve of the actress turning 35 years old on May 30, 2020, here are some fun facts about the pretty lady along with some really amazing pictures. Jennifer Winget Amasses 9 Million Followers on Instagram.

Jennifer Winget started her career as an actress when she was as young as 12 years old.

Roll Camera, Action! Let me introduce you to Zoya Siddiqui as she begins shooting for #Bepannaah on @colorstv

Corona 101: And Donot... I repeat, Donot touch your face, like I am here #issuedinpublicinterest #coronago #lifeinthetimeofcorona

The actress' Bollywood debut could have been Kunal Kohli's Phir Se but the movie ended up releasing online.

Waking up to the best news today and what a surprise out of the blue!! Elated and anxious both at once that #PhirSe is now available worldwide on #Netflix Go watch it... then post me the scene you liked the most! Link in my bio. #reminiscing

If there was one role that Jennifer wanted to pull off from Bollywood, it would be that of Rani Mukerji’s in Black.

Just like her character Maya in Beyhadh season 1, Jennifer's favourite colour is white and her wardrobe has all kinds of white coloured clothes.

Sweet dreams are made of these.... Baki sab Moh #Maya hain 😊 Goodnight guys!

Her junk food joints are Mcdonalds and Subway. Her fave restaurant is Peshawari at ITC.

Though Jenny had a bod to die for, she hates going to the gym.

Have to give it up for the guys at @skechersperformanceindia who’ve gone and outdone themselves this time - they’ve even covered Long distance running now!! So make way for the SKECHERS GoRun 7 line up. Fitness enthusiasts take note, please. These new kicks on the block are super lightweight, responsive and extremely comfortable. I’ve tried ‘em and now can’t do without ‘em for my early morning runs or treadmill workouts. Yeah!?! So what are you looking at? GOOOO RUN and Get ‘em! #GoRun7

Off lately, she has been spotted doing pilates, but otherwise, Jennifer's fitness mantra (or the idea of it) is drinking fresh vegetable juice.

Imma be a Yogini ...coz when you own your breath, no one can steal your peace. #alwaysbeaworkinprogress #calmisasuperpower

The actress is a fan of Satya Paul and his collections.

#thatswhatshesaid ...The curtains closed on Beyhadh, but Maya stays with me. This lil’ baby from #ITAwards just made sure! #bestactress

Very less if known of Jennifer's family. Winget’s father is a Marathi Christian and her mother a Punjabi. She also had an elder brother who is married and has a son, Sean. Jenny is very close to her nephew.

Love in Abundance at Easter Time. Happy Easter all!🐣

Jennifer was not set to be a part of Saraswatichandra, because of some contract problems. However, she was brought back on board when a suitable replacement was not found. Well, we are very very glad.

An alternate career option for Jennifer would have been that of an air-hostess.

Water you doing this summer? Imma be rolling back to my dippidy-do-daa days! #pooldairies #shootcrew

Jennifer has a commerce degree from Mumbai's K.J. Somaiya College.

*Insert Witty Instagram Caption Here* . By Post 3, my mind seems to have isolated itself too! #quarantinediaries #inthepinkoflife #makeitpop

Jennifer has established herself in the industry as one of the A-listers and is said to be earning as much as Rs 1,00,000 per episode on her shows.

Well, the actress also recently made her debut with ALTBalaji's Code M, a thriller where she played an Army Officer who unearths a conspiracy. Her role as Monica won her accolades and was a first where Jenny played a no-nonsense and fast-paced role. Fans now eagerly await a Code M season 2. Happiest Birthday Jennifer. Here's wishing you a busy year workwise again!

(The above story first appeared on LatestLY on May 30, 2020 10:30 AM IST. For more news and updates on politics, world, sports, entertainment and lifestyle, log on to our website latestly.com).