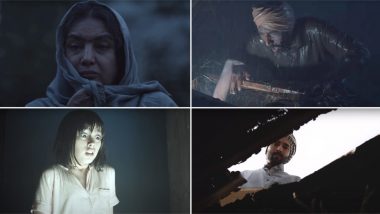 Netflix has offered some brilliant Indian horror series and films in the past. Ghost Stories (an anthology of four shorts) and Bulbbul are the popular originals. The streaming giant is all set to treat us all with another spine-chilling drama, Kaali Khuhi. Starring Shabana Azmi, Sanjeeda Shaikh, Satyadeep Misra and Riva Arora, the makers have dropped the teaser of it and it would give you goosebumps. And this film is all set to be released ahead of Halloween 2020. Bulbbul: Anvita Dutt Gives a New Meaning to ‘Chudail’ in Tripti Dimri, Avinash Tiwary’s Netflix Film.

Kaali Khuhi, directed by Terrie Samundra, is all set to be released on Netflix on October 30 and Halloween falls on October 31. Well, from the glimpse of this teaser, Kaali Khuhi looks like a perfect watch for Halloween night. This teaser will shares a glimpse of the female infanticide that takes place in rural Punjab and also the mysterious deaths of the people living there. The synopsis reads, “With its brutal history of female infanticide, a village in Punjab is the scene for mysterious deaths of its residents. Now Shivangi, a 10-year-old girl, must save her family’s village from the restless ghosts of the village’s horrific past.”

Watch The Teaser Of Kaali Khuhi Below:

The visuals and the background music will offers numerous eerie moments. What the 10-year-old does to save her family from the restless ghosts of its horrific past is something all are eagerly looking forward to. The film’s director Terrie Samundra has also penned the script along with David Walter Lech.  Kaali Khuhi will be streaming on Netflix on October 30, 2020.

(The above story first appeared on LatestLY on Oct 05, 2020 01:29 PM IST. For more news and updates on politics, world, sports, entertainment and lifestyle, log on to our website latestly.com).