Kapil Sharma – I’m Not Done Yet Review: The Star-Comedian Provides Barrels of Laughs As He Takes Us Through His Life Journey in This Standup Special (LatestLY Exclusive)

Kapil Sharma: I'm Not Done Yet is a Netflix standup special performed by Kapil Sharma. He recounts his life journey through the high and lows, as he recalls his battle with depression, his Twitter rant against a famous politician and gate-crashing Shah Rukh Khan's private party. 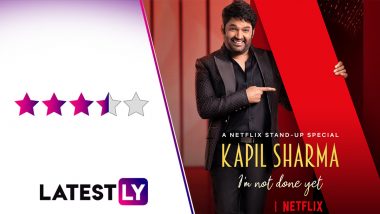 Kapil Sharma: I'm Not Done Yet Review: You may love his show The Kapil Sharma Show or hate it, but there is no denying that Kapil Sharma is genuinely one of the funniest comedians we have in the country. I do not like the skits on the show but during his interactions with the celebs or when he does his mini-standups, the man has the knack to make you smile. Now Netflix has given Kapil his own standup special, and what we get in Kapil Sharma: I'm Not Done Yet is a warm, funny, no-holds barred session where Kapil Sharma regales us with anecdotes, touches upon sensitive episodes of his life and drops a surprise near the end. Kapil Sharma – I’m Not Done Yet Streaming Date and Time: How to Watch Star Comedian’s Netflix Standup Special Online.

I'm Not Done Yet is Kapil Sharma reiterating in his own way what could be Robert Frost's iconic lines, 'I have miles to go before I sleep'. Performing in front of a live audience that consists of his wife Ginni Chatrath, some of his family members, his TKSS castmates and television personalities, Kapil Sharma recalls his journey as an aspiring comedian from Amritsar to being one of the biggest television personalities in the country right now. That he does so without the need to brag about it is quite commendable.

There are quite a few portions where I LOLed out, in some I was ROLFed (pardon my jargons there), and in some, I merely smiled as I didn't catch what Sharma was trying there (and I believe, even his audience was trying to grasp that as well). There are quite a few marriage jokes, which the TKSS fanbase might be habituated with. The starting joke about COVID-19 might be tasteless, and I was a little uncomfortable with the 'class' gags. Overall, though, I loved many of the jokes, like the one he made about Doordarshan, or how his tweets don't have spelling errors after eight pegs or dating troubles in Amritsar or ribbing Harbhajan Singh  and so on.

What I genuinely liked about Kapil Sharma: I'm Not Done Yet is how Kapil formats the special through some of the dark patches on his life, in what he says was his conversation with a therapist. From the time he tackled depression to his infamous Twitter rant to the PM to alcoholism to losing his father in his early '20s, Kapil doesn't hold back on the lows of his life, but spiritedly uses them to regale us with his trademark humour. He also shared the pictures from his childhood (though with some funny twists). Kapil Sharma Opens Up About the One Thing He Loves More Than Comedy.

There was some risqueness too, like deliberately 'mistakenly' calling the spouse of India's biggest industrialist as 'India's Biggest Wife', before hastily rectifying it. He also takes some sly digs at He Who Must Not Be Named (of course, if Kapil can't take his name, why would we?), and perhaps to balance that, he also makes a joke on the youth Opposition Leader, which comparatively, I found to be flat. He even speaks of religious harmony with a beautiful couplet.

But more than the humour, it was heartwarming to learn about Kapil's life be it his early struggles, his relationship with his father, his love story and his early successes and failures, while he drops some nice philosophical gems. The title of the show really comes to its own when he shares an anecdote about gate-crashing at Shah Rukh Khan's private party at 3 am in Mannat.

The last bit of the special is him doing something he loves the most - singing. Dedicating the song to his late father, Kapil surprisingly croons in English, with lyrics written for the occasion. Kapil Sharma didn't need to prove to us how far he has come ahead from a middle-class upbringing by singing in the Queen's language on a Netflix platform, but perhaps he needed to show to himself how he crossed that barrier. It is his personal milestone. That really touched my heart!

- A Heartwarming Standup with Some Good Jokes

- Some Gags Might Be Offensive or Below the Belt

(The above story first appeared on LatestLY on Jan 28, 2022 01:38 PM IST. For more news and updates on politics, world, sports, entertainment and lifestyle, log on to our website latestly.com).