The two haven't worked together since their brawl but they do exchange sweet words at times. 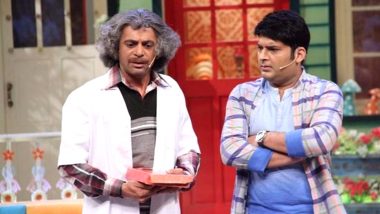 Comedian and actor Kapil Sharma has been grabbing headlines for various things outside his show The Kapil Sharma Show. One of them was his brawl and tiff with then co-star Sunil Grover. The banter went on for a long time and both eventually built the bridge between them by being cordial. The two haven't worked together since then but exchange sweet words at times. Today, on Sunil's birthday, Kapil extended warm wishes to him on Twitter. The Kapil Sharma Show Returns after a Long Gap and Fans Cannot Contain Their Excitement - Check Out Tweets.

In his recent tweet, Kapil wrote, "Happy bday @WhoSunilGrover paji stay happy n healthy always  lots of love always." There has been a high demand of their reunion owing to their on-screen bonding as well their off-screen friendship during their TV stint together. Even though they have moved on to different paths professionally, they are all-okay when it comes to personal bond. Here, check out the tweet below.

(The above story first appeared on LatestLY on Aug 03, 2020 04:19 PM IST. For more news and updates on politics, world, sports, entertainment and lifestyle, log on to our website latestly.com).