Kirti Kulhari, who has been part of many OTT projects including The Girl On The Train and Four More Shots Please, says that OTT has changed the way showbiz works. 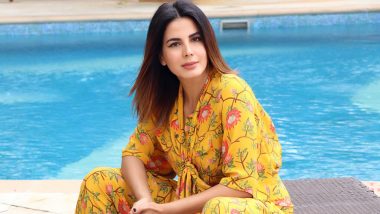 Actress Kirti Kulhari, who has been part of many OTT projects including The Girl On The Train and Four More Shots Please, says that OTT has changed the way showbiz works. She says that for an OTT project, a big name may garner buzz initially but after that it's just the content that matters. The Girl on the Train: Kirti Kulhari Calls Her Role as a Cop ‘Very Special’, Says ‘It Feels Great To Be Appreciated for This Role’.

"If you are claiming to make content-oriented stuff, then you have to have people who do justice to it. OTT is a space where initial attraction might happen due to a popular face but at the end of it, your name is not enough. I want to see something real and valuable if I am giving my five hours to a show on OTT. Good performance is what works at the end. Rather than projects, cinema is being created in a lot of ways," she told IANS. The Girl On The Train: Makers Reveal Aditi Rao Hydari, Kirti Kulhari, Parineeti Chopra, Avinash Tiwary’s Character Posters From The Mystery Thriller!

Talking about mass entertainers that feature big male superstars, Kirti says that most of them are produced by these stars and, hence, they have the bigger say. "A lot of them have turned producers and have a bigger say in terms of what they want. It is fair to some extent as they are putting money in the project. Also, the kind of films they are part of is about them," she says. She says that these films are like a "business proposition" for them.

"They are clear about their target audience. It's more of a business proposition than work for them. They are driven by the profits and business part. I understand the game but I am not a supporter or admirer of this way of doing things," she says. However, she says that this has changed with the newer crop of actors coming in.

"For the newer actors coming in, it's about actors and not male or female actors. There are stories being written and actors are playing their parts. The game is changing from the writing stage itself. OTT is a big reason that this is changing. Regional cinema also offers a variety of good content. Now things are done differently. The newer generation of actors and producers understand the value of doing something. Producers cannot have one person carry the series on their shoulders because of their stardom," she says.

(The above story first appeared on LatestLY on Mar 24, 2021 06:02 PM IST. For more news and updates on politics, world, sports, entertainment and lifestyle, log on to our website latestly.com).