The Girl On The Train is the Hindi remake of the Hollywood film of the same name. The Hindi version, directed by Ribhu Dasgupta, will feature Parineeti Chopra as the leading lady. 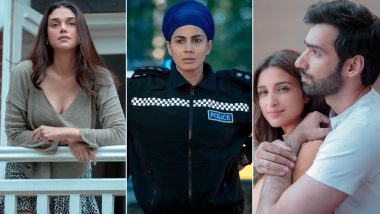 The Girl On The Train is the Hindi remake of the Hollywood film that had starred Emily Blunt in the lead. The Hindi version, directed by Ribhu Dasgupta, will feature Parineeti Chopra as the leading lady. The film also features Aditi Rao Hydari, Kirti Kulhari and Avinash Tiwary and the makers have revealed the character posters of the cast members. These character posters from the mystery thriller look intriguing and one just cannot wait to watch how the Hindi version. Parineeti Chopra, Avinash Tiwary's The Girl On The Train to Premiere on Netflix on February 26.

Talking about the character posters, Aditi Rao Hydari is looking bold and beautiful in a casual outfit and the backdrop seems that she is standing at the terrace of her apartment. Kirti Kulhari, sporting a turban, is seen dressed as a police official based out in London and looks like she is standing at a crime scene. Avinash Tiwary and Parineeti Chopra are seen as an adorable husband and wife duo. Take a look at the pictures below: Saina Nehwal Biopic: Parineeti Chopra Starrer To Skip Theatrical Release?

The Girl On The Train Character Posters

The Girl On The Train is produced under the banner of Reliance Entertainment. The film that was initially scheduled to be released in May 2020 and had to be postponed due to coronavirus pandemic, will now be released on Netflix on February 26.

(The above story first appeared on LatestLY on Jan 30, 2021 09:10 AM IST. For more news and updates on politics, world, sports, entertainment and lifestyle, log on to our website latestly.com).