Loki Season Finale: 6 Baffling Questions That Are Bothering Us About the Marvel’s Disney+ Series

Loki just had its season finale premiere on Hotstar Disney+ and it ended on a high note that has us excited for the future of the Marvel Cinematic Universe (MCU). The finale saw Loki and Sylvie venture into the void beyond Alioth and find out who exactly is behind the Time Variance Authority 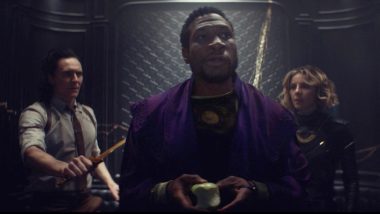 Loki just had its season finale premiere on Hotstar Disney+ and it ended on a high note that has us excited for the future of the Marvel Cinematic Universe (MCU). The finale saw Loki and Sylvie venture into the void beyond Alioth and find out who exactly is behind the Time Variance Authority (TVA). Loki Episode 6: Netizens Hail the Satisfying Finale; Rejoice Over Introduction of Jonathan Majors in This Tom Hiddleston Series!

It was a spectacular finale that answered so many of the questions that we had going into the episode. It revealed who the big bad behind the TVA was and set up a potential major villain for the next few phases. While the finale did answer a lot of our questions, it left us with quite a few of them as well. So here are six questions that we have after the season finale of Loki. Loki Episode 6 Ending Explained: Decoding Jonathan Majors’ Villain Reveal, the Political Connect and What It Means for Season 2 and Future of MCU (SPOILER ALERT).

How Will the Multiverse Affect MCU?

Loki even introduced to us the Multiverse, which feels like a big theme going forward with the MCU. It looks like the ending over here will have a huge impact on the MCU moving forward. Considering how Spider-Man: No Way Home is rumoured to be a multiverse film, and Doctor Strange in The Multiverse of Madness directly toying with the above mentioned concept, it doesn’t seem too far-fetched to speculate that Loki will have a major impact on those movies.

What Happens to Sylvie?

Sylvie after she kills the one who remains, it's unclear what happens to her after that. She is just left all alone in the castle while the timeline starts getting messed up. Where her story will pick off after this has us questioning what her role will be in the MCU going forward.

Where Did Ravonna go?

In the episode we can see Ravonna leaving for a place using the TemPad, but we don’t know where it is. It has something to do with the mysterious information that Miss Minutes passed on to her, and that info might have come through Kang. It potentially sets Ravonna up as one of the major characters in the MCU going forward. Considering how big of a part of Kang’s mythos she is, it has us excited to see Ravonna again.

Was That a Different TVA?

By the end when Loki approaches Mobius, Mobius doesn’t seem to recall who he is. This leaves Loki in a state of shock which then makes the camera pan towards a statue of Kang. This might make it seem like that this might be a different TVA headquarter where everyone is oblivious about what’s going on. Or maybe Kang's death has reset the memories and they are now working for a new boss, who is using him as a front now. The same way Kang did with the Time-Keepers.

When Will We See Loki Next?

With the ending of season one of Loki, we got a confirmation for season two as well. While season two still looks like it’s a few years off, it has us wanting more of Loki. With how the season ended it has us wondering whether Loki will show up in any other film or not. Perhaps, in Doctor Strange in the Multiverse of Madness.

Is Kang the Next Big Bad of MCU?

(The above story first appeared on LatestLY on Jul 14, 2021 09:24 PM IST. For more news and updates on politics, world, sports, entertainment and lifestyle, log on to our website latestly.com).