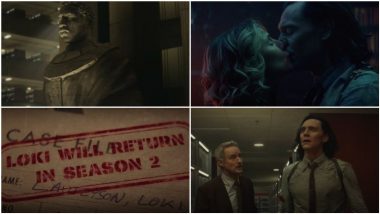 Before we begin, and we have to begin with something MAJOR (pun intended) about the final episode of Loki, here's the SPOILER ALERT warning. Loki's episode 6, aka the FINALE, is, like the rest of the series, brimming with some MAJOR Surprises and fulfilling even more major FAN expectations. Disappointed that Mephisto did not land in WandaVision? Guess what, that was a decoy, so that when you heard murmurs of Kang the Conqueror making his presence felt in Loki, you would keep the expectations down. And then be surprised when the man in the castle turns out to be, well, the supervillain himself! Loki stars Tom Hiddleston, Gugu Mbatha-Raw, Wunmi Mosaku, Eugene Cordero, Tara Strong, Owen Wilson, Sophia Di Martino, with Jonathan Majors making a special appearance in the season 1 finale. Loki Episode 6 Recap: Miss Minutes, Multiversal War, The Shocking Cliffhanger Ending and More - 8 Plot Twists From Season Finale of Marvel’s Disney+ Series

I am sure, that like us, many of you would be surprised by Jonathan Majors appearing as the man behind the existence of TVA. Majors was cast as Kang The Conqueror, and was supposed to make his MCU debut as the antagonist in Ant-Man & The Wasp: Quantumania. Guess, Kevin Feige allowed director Kate Herron to pull a nice rug from our feet! And that wasn't the only surprise on the finale, which was less action-packed than the previous episode and more talkative. What's more, there is still a lot more to come.

So let's begin with the decoding of that ending!

It is interesting that the episode doesn't name Majors' character as Kang, though he does drop his epithet - 'conqueror', while listing out the various names given to him over the years. A human from the 31st Century, one of his variants discovered the existence of multiverse, and it was not long for them to drop the peace and began a multi-versial war. So another one of the variants took control of the war, created the TVA to tackle the breaches, used Alioth to prune the variants and kept only one Timeline alive. Loki Episode 6: Sonakshi Sinha's Swag Saha Nahi Jaye Song Finds A Place In Season Finale Of Tom Hiddleston's MCU Series.

In the comics, Kang the Conqueror is a time-travelling supervillain who goes by many aliases. In Loki finale. Kang doesn't need to travel through Time, he has managed to control and tame it. and thus make him an omniscient being? This begs us to ask...

From what we have been told since childhood, God is a supreme, eternal being who knows everything what we have done, is doing and are going to do. If that's the case, then the idea snatches the very existence of 'free will' that we are supposed to have. After all, as He Who Remains tells Loki and Sylvie, they think they caught up to him, but it is he who created the path for them to arrive at his castle.

If Kang knows whatever we are doing till now, and basically controlling our fates in the process, it does make him 'God', doesn't it? If that's the case, then it is quite funny that in a franchise that has actual Gods like Loki, Thor and Odin, it is a human who controls their fates. Which itself leads to the other paradox - God creates Man, Man creates God.

There is no denying that Marvel sagas have been quite political in their nature, without being too overt about it. Captain America: Civil War dealt with the repercussions of US action in a foreign land. The Falcon and the Winter Soldier dealt with black oppression. Loki has all been about The Greater Good, and the strict measure taken to maintain it.

Kang, through TVA, is trying to maintain universal peace by wiping out multiple universes. His firm belief that without any control, what we get is chaos is something also reflected in Ravonna Renslayer's thoughts when she speaks to Mobius. So this bring fore a very topical and relevant debate point - for the sake of 'peace', are we okay to sacrifice free will and give control to our lives to someone we don't even know properly?

And let's remind you here that it is one of the Kang variants who discovered multiverse, thus marking the beginning of chaos, and it is he who tries to put a measure to end it. Before he meddled, the multiverse was just functioning fine. Just like the country from where this series came from, a nation who created most of its enemies, be it Taliban or Saddam, before it tried to put control in the name of 'peace'. Just like any politician who themselves create the problem and then claim they have the solution for the same problem they made?

The next time someone asks you, 'If not Mr X, then who?', do think harder.

Have to say that when He Who Remains sits down to explain why he has to do what he has done and give both Loki and Sylvie a choice, it feels like the scene when Neo (Keanu Reeves) met the Architect in The Matrix Reloaded. Only way less boring and snappier, more thanks to Majors' enthused performance.

The ending brought out the base urges that defined the contrasting natures of Loki and Sylvie. Loki was all for replacing Kang and be the next controller of TVA, albeit in his mind, being more merciful than his predecessor. This recalls us the real nature of the character from the first movie he appeared in -  Thor.

Loki never thought that his foster brother Thor could be the right ruler for Asgard, and that he is a better fit as the king. Since this variant has never lived through the events of Thor: Ragnarok, he doesn't know how even he was as bad a ruler for Asgard, failing to anticipate Ragnarok. Kang's proposition pleads to his basic urge - to rule over people, thinking he could do better than the person already on the throne.

Sylvie, meanwhile, was a Loki variant who knew of her adopted identity and was ok with it, was stripped off her royal privilege as a child and has been on the run from the authorities. For her, 'free will' matters more than anything else, and even the option of being the next ruler of TVA is something she can't stand by as it goes against her basic principles. Loki represents benevolent autocracy and Sylvie the rebellious socialism.

So Sylvie pushes Loki back to TVA after lowering his defences with a kiss and then kills Kang with her knife, a death that he willingly accepts with a promise that he would return. And he would, since the multiverse has already begin branching out, which means more Kang variants would be born, and the cycle would start again.

Basically, it means that even the process of putting the idea of 'free will' into motion can only lead to temporary relief, as at some point of time, it will lead to a point where someone comes in to put a set of harsh measures in the name of controlling chaos. Now you might know why democracies all around the world are crumbling in the wake of fascism.

So He Who Remains is gone, Sylvie is there at the End of Time, the multiverse is branching out at an exponentially faster rate. Loki is back at TVA where he finds out that Mobius and Hunter B-15 have forgotten about him, believing him to be some analyst working at TVA. And then he sees the huge statue of Kang in the TVA corridor and the episode ends.

Before that happens, if you observe the conversation between Mobius and Hunter B-15, the latter tells the former is 'he' expects them to clean up everything. 'He' in this case, we believe to be He Who Remains, considering it is his statue there. The thing is that both of them aren't aware of the person's existence. So has Sylvie's murder of He Who Remains only managed to reset the TVA, along with the employees' memories there, bringing a new boss for them?

While I like to believe that Kang is back again to control things, seeing his statue replacing that of the fake Timekeepers also means that he could be merely a namesake here. A figure that the organisation can look upto while someone hidden is running the show. Just like Kang did earlier, with the Timekeepers.

So if that's the case, who could it be? Is it Renslayer who has used the TemPad to disappear God Knows Where? Or is it Sylvie, who might have finally given thought to what Loki told her and decided to take Kang's throne?

The Future of MCU

Multi-verse is here, baby, and it will take some time for TVA to control it. The Existence of Multiverse can mean a lot to Marvel Cinematic Universe's future. For one, it is definitely going to be a major part of Doctor Strange in the Multiverse of Madness, the title being a SPOILER there. Kang is confirmed to appear in Ant-Man 3, though we are not sure if it is the same entity we saw in the finale episode, or a different variant, who actually goes by the name of 'Kang the Conqueror'. The presence of multiverse can also play into Spider-Man: No Way Home (the idea was teased in Far From Home, before it turned out to be a fake-out), while it allows MCU to bring in X-Men and Fantastic Four into the fold. Possibly even the Defenders too. Like the many branches of the multiverse, the possibilities are limitless. Who knows, even Tony Stark and Black Widow can return? No one really dies here!

And of course, the season 2 of Loki was already confirmed even before the first season began airing. So we will have Loki and the gang back to undo the damage they did in the finale. Hoping that this would also bring back Kid Loki and Alligator Loki out of their Void and put them in the spotlight again. Loki is streaming in India on Disney+ Hotstar.

(The above story first appeared on LatestLY on Jul 14, 2021 03:37 PM IST. For more news and updates on politics, world, sports, entertainment and lifestyle, log on to our website latestly.com).