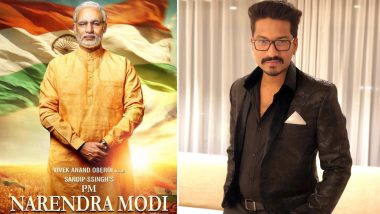 In the decade of biopics, Bollywood is currently abuzz with two such films, a Manmohan Singh Biopic titled The Accidental Prime Minister starring Anupam Kher in the titular role and another biopic on the current PM of India, Mr Narendra Modi. And playing the prestigious role will be played by actor Vivek Oberoi. And the actor, who is a self-confessed fan of the leader, calls it a role of a lifetime. The biopic will be directed by Omung Kumar, who has films such as Mary Kom and Sarbjit to his credit. PM Narendra Modi Biopic, The Accidental Prime Minister – 5 Movies Accused of Being Political Propaganda That You Can Expect in 2019

The first look of the film was released on January 7 and the posters received mixed-reactions. But one thing that everyone was sure of was that Vivek looked nothing like Modiji in them. And Twitter too had lots of hilarious things to say about the poster and Vivek Oberoi’s look. PM Narendra Modi Biopic First Look: Vivek Anand Oberoi Is Unrecognisable As Modiji; View Pics

However, amidst all this chaos, this film marks a well-known television personality’s entry into the B-Town space. And we are talking about comedienne Bharti Singh’s writer hubby Haarsh Limbachiyaa here. And before you start wracking your brains on what will Haarsh be playing, he is debuting as the dialogue writer with the Modi biopic. Haarsh has written for television comedy shows like Comedy Circus, Comedy Classes and Comedy Nights Bachao.

And an elated Haarsh shared the news with his fans and followers on social media.

My first film as a dialogue writer👏. Thank you soo much #sandeepsingh @vivekoberoi @omungkumar for giving me this opportunity of a life time.🙏🏻 what a start of #2019 for me😇

The film will go on floors in mid-January. Reportedly, the film will be shot across Gujarat, Delhi, Himachal Pradesh, and Uttarakhand, among other locations in the country, over a period of a few months. "I am extremely fortunate. Today, I am feeling like I felt 16 years ago, during 'Company' days. I am feeling the same kind of excitement and hunger because this is the role of a lifetime for any actor. I truly believe at the end of the journey, I pray I become a better actor and a better human being," Vivek revealed.

(The above story first appeared on LatestLY on Jan 09, 2019 10:09 AM IST. For more news and updates on politics, world, sports, entertainment and lifestyle, log on to our website latestly.com).