MODI Season 2 – CM TO PM Review: In Modi: A journey of a common man we saw Narendra Damodardas Modi's life as a 'swayamsevak', a determined individual who moulds his livelihood for the betterment of society and nation-building. However, the sequel of the Eros Now show is all about Mahesh Thakur who essays the character of Modi with perfection. 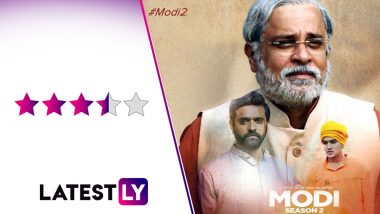 MODI Season 2 – CM TO PM Review Ratings (Photo Credits: File Photo)
MODI Season 2 – CM TO PM Review: In Modi: A journey of a common man we saw Narendra Damodardas Modi's life as a 'swayamsevak', a determined individual who moulds his livelihood for the betterment of society and nation-building. Well, Ashish Sharma and Faisal Khan outplayed Modi's youth and childhood phase convincingly and as of now, the sequel of the Eros Now show is all about Mahesh Thakur who steps in the shoes of Modi from the day when he got appointed as the CM of Gujarat in 2001. Modi Season 2 - CM TO PM starts of well with the BJP stalwart Atal Bihari Vajpayee convincing Narendra Modi to take the CM seat in Gujarat and some real-life footage just adds a cherry on the cake. Mahesh Thakur gets his dialect right and fits in the character so flawlessly that it might surprise the viewers that what has the veteran actor done to get it so right. PM Narendra Modi Biopic: Vivek Oberoi Starrer To Re-Release In Theatres On October 15! First Movie To Hit The Big Screens Post Lockdown
The first episode sees the rise of people's leader and we see a no-nonsense Modi clarifying his companions that he is here to serve his people and not to favour any of his closed ones. The relentless hard work of the then Gujarat CM is the highlight of the first episode and we see a relentless leader ground rooted with his principle of serving the poor and needy souls of his homeland. We see a worried Modi in the Bhuj earthquake episode scolding the officials giving them deadlines for the project of the homeless. He is shown meeting the poor in person in earthquake-affected areas and maybe this is why the reason we have the man as the PM of India. PM Narendra Modi Thanks Virat Kohli For Birthday Wishes, Says ‘You and Anushka Sharma Will Be Amazing Parents’
Adapted by Kishore Makwana's acclaimed book Common Man's PM: Narendra Modi, the Eros Now Show quickly arrives on the Godra Riots chapter and Gujarat CM's intentions and actions to maintain proper law and order in the tough times are focused more. One fact that I personally verified is that he seeks help from Congress-ruled CM of Maharashtra, Rajasthan, Madhya Pradesh's help by requesting them police force which they deny and this is an episode which not many people might have known. Modi's controversial phase as CM and accusations of mishandling the situation is well shown in the series.
MODI Season 2 – CM TO PM Trailer
His rebuttal on every asked question and not hiding to address the people in the rally as well as media is one bold attribute showcased in the show as well. Well, the depth of the character is felt with Namo's skills and intention right in front of the people with clarity in thoughts that also conveys the spirit of brotherhood at the same time. Execution wise I personally felt the second season is way better than the first cinematically as well in terms of the depth that the titular character enjoys. BGM could have been better. Writers did a good job and there are some dialogues that might impress you as well. Overall it's a Mahesh Thakur show and the actor literally does justice to Narendra Modi's character.

- Perfect Use of Real-Life Footage

If you are looking forward to knowing about the intent, principles and philosophy of our current Indian PM back from his days as Gujarat CM, then this series might be of your liking. It is quite gripping than the first season and we get to see more of Namo who emerges as people's leader in the toughest of times. Watch it for the charismatic personality of Modi. It won't disappoint you.
Rating:3.5

(The above story first appeared on LatestLY on Nov 12, 2020 01:09 PM IST. For more news and updates on politics, world, sports, entertainment and lifestyle, log on to our website latestly.com).