PM Narendra Modi Thanks Virat Kohli For Birthday Wishes, Says ‘You and Anushka Sharma Will Be Amazing Parents’ 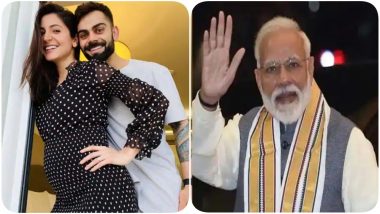 Virat Kohli on September 17, 2020, took to social media and wished PM Narendra Modi on his 70th birthday. The Prime Minister of India, in turn, thanked him for the wishes and also congratulated his wife Anushka Sharma for being pregnant. Kohli and Sharma have shared the good news of the two welcoming their first child in January 2021. The two were seen smiling in one frame with Anushka flaunting her baby bump on social media and the adorable picture had a cute caption as well. "And then we became three," read the caption of the picture. Anushka Sharma is Pregnant! Virat Kohli Makes the Big Announcement Via an Adorable Post.

"Wishing a very Happy birthday to our honorable Prime Minister Shri Narendra Modi ji. 🙏🏼@narendramodi @PMOIndia ," wrote the Indian cricket captain. The Indian PM said, "Thank you @imVkohli! I would also like to congratulate @AnushkaSharma and you. I am sure you will be amazing parents!" Check out the tweet below:

Thank you @imVkohli! I would also like to congratulate @AnushkaSharma and you. I am sure you will be amazing parents! https://t.co/6IsTEGOhAS

Thank you sir for your lovely wish! Hope you had a great birthday!

As of now, Virat Kohli is tied up with his upcoming assignment with the Royal Challengers Bangalore for the IPL 2020. Whereas Anushka Sharma has not declared any project after her film 'Zero' which also featured Shah Rukh Khan and Katrina Kaif. Anushka is currently in UAE with her husband Virat. RCB had recently celebrated the news of pregnancy by cutting a cake with the rest of the members of the team.

(The above story first appeared on LatestLY on Sep 18, 2020 07:17 PM IST. For more news and updates on politics, world, sports, entertainment and lifestyle, log on to our website latestly.com).