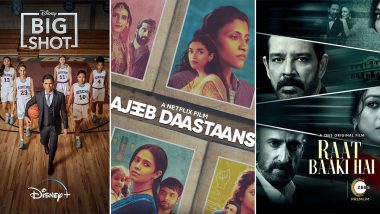 In the third week of April 2021, there are many interesting series and movies releasing on OTT platforms like Disney+ Hotstar, Netflix, Amazon Prime Video and ZEE5. Talking about the biggest release of the week, it would be Ajeeb Daastaans, which is all set to premiere on Netflix on April 16. Produced by Karan Johar, Apoorva Mehta and directed by Raj Mehta, Shashank Khaitan and Neeraj Ghaywan. The movie is an anthology of four strangely contrasting stories which goes through into broken relationships and unexplored spaces. The film stars Fatima Sana Shaikh, Nushrratt Bharuccha, Abhishek Banerjee, Aditi Rao Hydari, Shefali Shah, Konkana Sen Sharma and Manav Kaul in lead roles. Ajeeb Daastaans Teaser: Karan Johar’s Upcoming Anthology Looks Promising, to Premiere on Netflix From April 16 (Watch Video).

Another big release of the week would be Raat Baaki Hai, which is set to premiere on ZEE5 on April 16. Directed by Avinash Das, the thriller-drama is a story of one night where estranged partners end up meeting each other after 12 years, under an unusual circumstances. It is an adaptation of the popular play Ballygunge 1990. The film features Paoli Dam, Rahul Dev, Anup Soni and Dipannita Sharma in the cast. There are some Tamil and Malayalam films too that are lined up to release on Amazon Prime Video and Disney+ Hotstar and also few international releases on Netflix, and you might not want to miss them also. The list includes Tamil film Mathil and Paramapadham Vilayattu and the Malayalam film The Priest. Raat Baaki Hai Trailer: Anup Soni, Rahul Dev, Paoli Dam Thriller Is All About Murder And Shocking Revelations (Watch Video).

So which series/films are you most excited about? Share your thoughts in the comments section below.

(The above story first appeared on LatestLY on Apr 12, 2021 08:20 PM IST. For more news and updates on politics, world, sports, entertainment and lifestyle, log on to our website latestly.com).