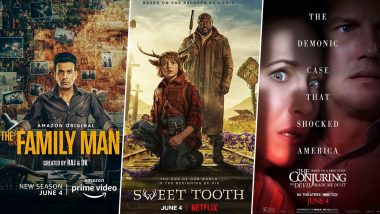 We are stepping on the first week of June 2021, and there are several exciting series and movies releasing on OTT platforms like Netflix, Amazon Prime Video and HBO Max. Talking about the biggest release of the week, it would be The Family Man Season 2, which is all set to stream on Amazon Prime Video from June 4. Directed by Krishna DK and Raj Nidimoru, the series is about a man working on National Investigation Agency, who tries to save the nation from an imminent attack. On the other hand, he manages to keep his family safe from his secret job. The action-thriller web series stars Manoj Bajpayee, Samantha Akkineni, Priyamani, Sunny Hinduja, Sharib Hashmi, Vedant Sinha and others. The Family Man Season 2 Trailer: Manoj Bajpayee, Samantha Akkineni's Series Is Packed With Exciting Twists and Unexpected Climax (Watch Video).

Another big release of the week would be The Conjuring 3 aka The Conjuring: The Devil Made Me Do It, which is all set to premiere on HBO Max on June 4. Helmed by Michael Chaves, the supernatural-horror flick is the eighth instalment in The Conjuring franchise. It's a story of murder, terror and unknown evil which will shock the experienced real-life paranormal investigators. The film stars Patrick Wilson, Vera Farmiga, John Noble, among others. Another interesting release of the week would be Sweet Tooth, which will drop on Netflix on June 4. The adventure-drama series created by Beth Schwartz and Jim Mickle features Christian Convery, Nonso Anozie, Nixon Bingley, Dania Ramirez, James Brolin and others.  Sweet Tooth Trailer: Hybrids Are On The Run From Humans But A Boy With Horns Hopes For A Safe World (Watch Video).

(The above story first appeared on LatestLY on Jun 02, 2021 10:11 AM IST. For more news and updates on politics, world, sports, entertainment and lifestyle, log on to our website latestly.com).