The much-awaited second season of Amazon Prime Video's critically-acclaimed web series The Family Man is slated to be released on June 4, the streamer announced Wednesday. Fronted by Manoj Bajpayee, the series was scheduled to return earlier this year. 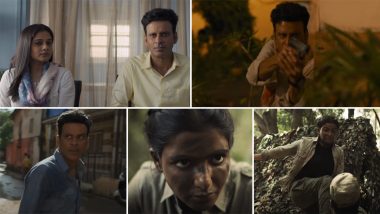 The much-awaited second season of Amazon Prime Video's critically-acclaimed web series The Family Man is slated to be released on June 4, the streamer announced Wednesday. Fronted by Manoj Bajpayee, the series was scheduled to return earlier this year. The new season will see Bajpayee's Srikant Tiwari pitted against a new, powerful and brutal adversary named Raaji, essayed by Samantha Akkineni, who makes her digital debut with the show. The Family Man: 7 Things We Expect to See Happen in Season 2 of Manoj Bajpayee’s Amazon Prime Original Series (SPOILER ALERT).

The streamer also released the trailer of the nine-part thriller which will see Srikant continuing to jostle between the duality of being a middle class family man and a world class spy and trying to save the nation from an imminent attack. Packed with exciting twists and an unexpected climax, the upcoming season of the edgy action-drama series will give a riveting glimpse of the two worlds of Srikant. The Family Man Season 2 Trailer Starring Manoj Bajpayee and Samantha Akkineni To Be Out on May 19 At This Time!

Creator and director duo Raj Nidimoru and Krishna DK said they are delivering on the promise that season two will be out by end of this summer. "The wait will finally be over on 4 June as Srikant Tiwari will return with a thrilling storyline, and 'danger really has a new face' — Samantha Akkineni, who has done a tremendous job, along with the always-fantastic ensemble cast," the creators said in a statement. "We are confident we have carved out an exciting season for you all, despite having to work through the pandemic. Hopefully the new season will be worth the wait. These are extremely difficult times, and we hope and pray for better times. Please stay safe, mask up, and vaccinate as soon as you can," they further said.

Aparna Purohit, Head of India Originals, Amazon Prime Video, said the new season of "The Family Man" is bigger, more complex and dials up the action."We're confident that the viewers will be enthralled to witness the face-off between Srikant and his nemesis. It's a pleasure for everyone here at Amazon to unveil a content gem that connects with audiences in India and beyond and we just can't wait for the launch of the show's new season next month," Purohit added.