Lily James and Sebastian Stan's mini-series Pam & Tommy's first three episodes was released on Hulu on February 2. Having said that, sadly the series is the latest victim of piracy, as it has been leaked online for free watch and download. 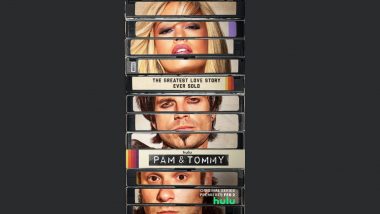 Lily James and Sebastian Stan's mini-series Pam & Tommy's first three episodes was released on Hulu on February 2, 2022. Created by Robert Siegel and produced by Point Grey Pictures, Annapurna Television and Lionsgate Television, the show is based on the 2014 article by Rolling Stone, named Pam and Tommy: The Untold Story of the World's Most Infamous Sex Tape by Amanda Chicago Lewis. However, the biographical series has garnered mixed reactions from critics. The synopsis of the show reads, "Pam & Tommy depicts the marriage between Pamela Anderson and Tommy Lee and the release of their infamous unauthorized sex tape which was recorded privately during their honeymoon." Pam & Tommy Review: Lily James and Sebastian Stan Series About Pamela Anderson and Tommy Lee's Sextape Scandal Gets a Positive Nod From Critics.

However, this is not the first time, a series has been leaked and surfaced online for free watch and download. Almost every show falls prey to this chaos. In the past, many strict actions were taken against these pirated sites, but even after getting blocked, the websites bounce back promoting piracy. This needs severe action by the cyber cell. This really needs to be stopped with hard steps in future. Pam & Tommy Trailer: Lily James as Pamela Anderson and Sebastian Stan as Tommy Lee Are Unrecognisable in Hulu’s Recreation of Their Sex Tape Scandal (Watch Video).

For the unversed, Pam & Tommy sees Lily James as Pamela Anderson and Sebastian Stan as Tommy Lee. Apart from the leads, the series also stars Nick Offerman, Seth Rogen and Taylor Schilling. The first three episodes of the show has been released, now the other five episodes will be dropped weekly. Pam & Tommy is currently streaming on Hulu.

(The above story first appeared on LatestLY on Feb 03, 2022 05:58 PM IST. For more news and updates on politics, world, sports, entertainment and lifestyle, log on to our website latestly.com).