The 55-year-old actor has starred as Dr Derek Shepard, also known as 'McDreamy' on Grey's Anatomy for the show's first 11 seasons of the show, which was created by famed writer Shonda Rhimes. 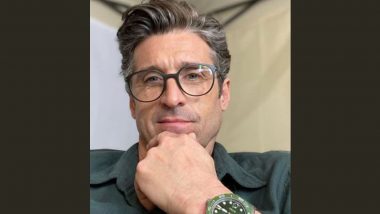 Actor Patrick Dempsey of 'Grey's Anatomy' fame is facing allegations of poor behaviour on the set of the medical drama show. According to Fox News, in her upcoming book, 'How to Save a Life: The Inside Story of Grey's Anatomy', author Lynette Rice opened up about Dempsey's time on set - and his departure, which shocked fans and industry figures alike. The 55-year-old actor has starred as Dr Derek Shepard, also known as 'McDreamy' on 'Grey's Anatomy' for the show's first 11 seasons of the show, which was created by famed writer Shonda Rhimes. Grey’s Anatomy: Patrick Dempsey Talks of Being Back in the Current Season of the ABC’s Medical-Drama.

For her book, Rice conducted over 80 interviews with cast- and crew members of the show, both past and present. "There were HR issues. It wasn't sexual in any way," former executive producer James D. Parriott revealed in an excerpt published by The Hollywood Reporter. He produced the first two seasons of the hit show before departing. He returned in season 11 to oversee Dempsey's exit. Parriott further recalled, "He was sort of terrorizing the set.Some cast members had all sorts of PTSD with him." Grey’s Anatomy Season 17: Patrick Dempsey Opens Up About Returning to ABC’s Medical Drama with His Beloved Character Derek Shepherd.

However, it wasn't always that way, as in various other interviews, the 'Enchanted' actor was described as "so gracious and lovely," "charismatic" and "personable". Actor Brooke Smith even recounted him standing by her and even defending her when she was fired from the show. By season 11, however, being the centre of the show seemingly had gone to the actor's head. "He had this hold on the set where he knew he could stop production and scare people. The network and studio came down and we had sessions with them. I think he was just done with the show. He didn't like the inconvenience of coming in every day and working. He and Shonda were at each other's throats," Parriott explained to the Fox News.

Former executive producer Jeannine Renshaw recalled tension between Dempsey and his co-star Ellen Pompeo, who played his on-screen wife.Pompeo, the producer said, would get tired of Demspey's complaints about how long he'd been on set. Renshaw noted, however, that upon being reminded that others had been on set longer, the actor would calm down.Another longtime crew member admitted that Dempsey had a "schtick" but explained that he was "miserable" and "had no one to talk to" once several "rogue actresses" went to Rimes with complaints about his behaviour.

Dempsey also was interviewed for the book and said that the lucrative paydays were a huge draw for him to stay, but that he was frustrated with the demanding schedule that kept him from his family. Renshaw recalled "the final straw," was when Rhimes "witnessed [the behaviour] herself, "Shonda had to say to the network, 'If he doesn't go, I go,' she said. Nobody wanted him to leave because he was on the show. Him and Ellen. Patrick is a sweetheart. It messes you up, this business." As per Fox News, his exit was complicated, and the writers crafted three possible storylines to accommodate his absence, ultimately choosing to kill his character off.