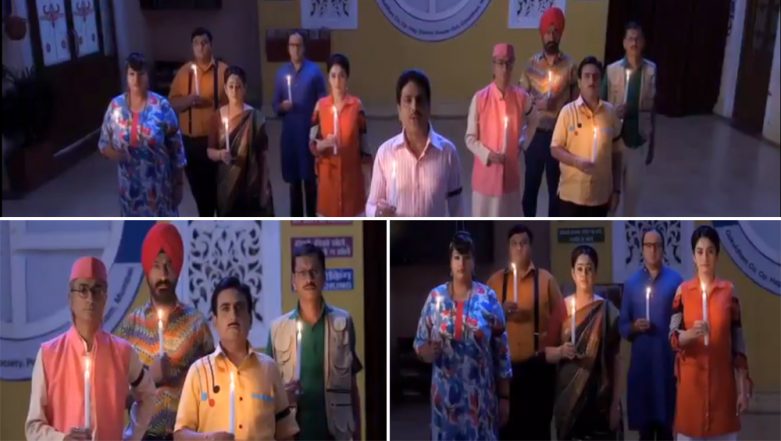 On Thursday, February 14, India saw one of the most tragic carnage in the history of terror attacks. As more than 40 Central Reserve Police Force officers were killed in a horrifying terror attack in Pulwama in Jammu and Kashmir, the people of this country mourned the deaths of our brave soldiers. Everyone across the quarters, paid their condolences and tributes to the innocent lives that were lost in a cowardly act. The cast and crew of Taarak Mehta Ka Ooltah Chashmah too paid a heartfelt tribute to the slain soldiers in their own way. The members of the show lit candles remembering the valour and sacrifice of the police officers and paid their homage to them. Pulwama Terror Attack: Mini Mathur Slams a Twitter User Who Trolled Her for Having 'Hinduphobia' and Converting to Islam.

From writing condolence messages on social media to taking action against Pakistani artists, the entertainment industry of India is putting in their smallest effort for the cause to fight against the dreadful attacks. The All India Cine Workers Association announced a total ban on Pakistani artists and actors from working in the country. Many actors such as Salman Khan, has put this statement into action by replacing Atif Aslam from his upcoming production Notebook.

Talking about the television industry, The Kapil Sharma Show is also facing a row of heat after Navjot Singh Sidhu’s statement with regards to the attack. However, adding more fuel to the raging anger, Kapil Sharma’s support to Navjot, has only worsened the matter. Many supporters and fans have even requested the show’s producer, Salman, to take action against Kapil. Kapil Sharma's Support to Navjot Singh Sidhu Irks Twitterati; #BoycottKapilSharma Starts Trending on Twitter.

The whole family of Taarak Mehta Ka Ooltah Chashma & #NeelaTeleFlims stands with the families of the jawans who fought for the safety of our country. #TaarakMehtaKaOoltahChashmah #TMKOC pic.twitter.com/XlgnWXMwE1

Well, the killing of our martyred heroes has triggered a mass uproar, which is not likely to settle down anytime soon.