Rahul Vaidya: Won’t Compare If Singers Are Bigger than Actors

Ever since singer Rahul Vaidya proposed to his girlfriend, model-actress Disha Parmar, on Bigg Boss 14, their fans have been excited to know when the duo will take the relationship to its next level. 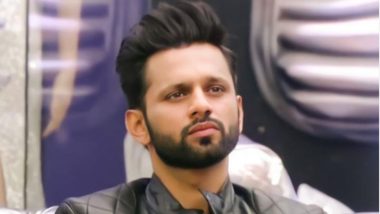 Ever since singer Rahul Vaidya proposed to his girlfriend, model-actress Disha Parmar, on Bigg Boss 14, their fans have been excited to know when the duo will take the relationship to its next level. A few days back, Rahul and Disha raised expectations of fans by posting "wedding pictures" that promptly went viral. It turned out soon enough the stills were of the new music video "Madhanya" that features Rahul and Disha. Rahul Vaidya and Disha Parmar Dance to Shah Rukh Khan’s ‘Tumse Milke’ Song at a Friend’s Sangeet (Watch Video)

The element of romance in his personal life has surely made Rahul, a teenybopper star since his "Indian Idol" days, a bigger glamour figure than ever before in his public life. Over the past months, he has constantly been in the news - first, because of his good form on "Bigg Boss 14" (he finished first runner-up) and then, of course, there has been his much-talked-about romance. Bigg Boss 14’s Rahul Vaidya To Reportedly Sing for Salman Khan in Radhe: Your Most Wanted Bhai.

Does he feel he has been enjoying a filmstar-like popularity lately, or perhaps he enjoys a fan base bigger than many filmstars? "I won't want to compare if we are bigger than filmstars or not. Everyone has their space, it is beautiful. Everyone puts in insane amount of hard work. Musicians have a different kind of hard work and actors have a different kind. Everyone has their space," Rahul took a diplomatic line, in conversation with IANS.

He acknowledges that singers enjoy a massive fan base around the world, and the culture has finally trickled to India. "I absolutely love actors and I think that is fantastic. In the West, Justin Bieber has more fans as music is universal. Musicians have hardcore fans. That culture has come to India, too. It's come bigtime. Pop stars get attention and love and that is beautiful," he said.

(The above story first appeared on LatestLY on Apr 13, 2021 10:32 PM IST. For more news and updates on politics, world, sports, entertainment and lifestyle, log on to our website latestly.com).