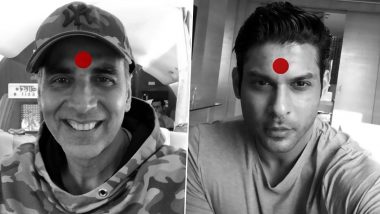 Ahead of the release of the film Laxmii, the team of the film and Akshay Kumar have launched a 'Ab Hamari Baari Hai' campaign in honour of the transgender community, on which the movie is based. Akshay took to Instagram to post a video to urge users to use the 'Red Bindi' filter on Instagram to show support for the third gender and called for their equal representation as well. Laxmii Bomb Is Now Laxmii! Akshay Kumar's Film Changes Title Over Outrage Days Before Its November 9 Release.

While Akshay Kumar, Kiara Advani, Jacky Bhagnani participated in the challenge, actor and Bigg Boss 13 heartthrob Sidharth Shukla also took part in the challenge. Sid used the IG filter and posted a message urging his fans and followers also to take up the 'Ab Hamari Baari Hai' challenge. Akshay Kumar's Laxmii Bomb Is Now Laxmii! 5 Other Bollywood Movies That Changed Titles Before Their Release Thanks to Controversies.

Really admire the initiative that Akki sir has started. We got to take a step beyond and show love, acceptance and support towards the third gender. Let’s wear the Laal Bindi and come together kyunki #AbHamariBaariHai unka saath dene ki jinhone aaj tak hamari khushi mein saath diya. ❤️

Laxmii Bomb, all set to release on November 9, is a story of a man who is possessed by the spirit of a transgender woman, who seeks retribution from the world against all the wrongs she was subjected to. The film met opposition from the Shri Rajput Kari Sena that claimed the title hurt Hindu sentiments and was an insult to the Hindu Goddess Lakshmi. This led to the makers changing the film's title to only Laxmii.

(The above story first appeared on LatestLY on Nov 08, 2020 07:07 PM IST. For more news and updates on politics, world, sports, entertainment and lifestyle, log on to our website latestly.com).