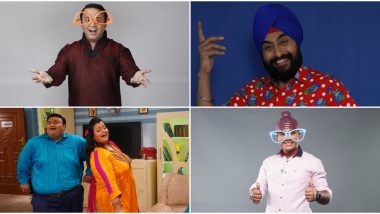 SAB TV's longest-running show Taarak Mehta Ka Ooltah Chashmah recently completed 3000 episodes. And achieving the milestone is a huge deal given it has given the show the title of the longest-running daily soap with an ensemble cast. In fact, the comedy show recently entered it's 13th year and producer Asit Kumarr Modi had good things to say. "3000 episodes is a significant milestone but at the end of the day, it still is just a number. We aspire to carry on entertaining and spreading social awareness amongst our viewers with the same dedication and passion like we have for the last 12 years." Taarak Mehta Ka Ooltah Chashmah Completes 3000 Episodes, Here's What Producer Asit Kumar Modi Has To Say.

And now, some of the show's actors too expressed their happiness on the show achieving its milestone. Balvinder Singh Suri who plays the role of Sodhi in the show said, "It’s Balle-Balle time for us! Cannot believe that the show has completed 3000 episodes. Although I have only recently joined the team but the set feels like home, like I belong here. On the sets, I feel like being a part of a big Indian family. The occasion is grand, so must be its celebration. It’s now time to party and no one, not even Roshan can stop me from celebrating." Taarak Mehta Ka Ooltah Chashmah: Sunayana Fozdar and Balvinder Singh Suri Confirm Coming on Board as Anjali Mehta and Roshan Singh Sodhi.

Nirmal Soni who plays the role of Dr. Haathi expressed, "As they say “Laughter is the best medicine” and we ensure that we keep you healthy with the humour. I came across quite a few viewers who felt optimistic during the whole lockdown watching our show. I feel proud being part of the show as it is one of the few shows on Indian Television that has witnessed such a huge fan base over the last 12 years. I am glad that we’ve completed 3000 episodes which makes it one of the longest-running daily comedy shows."

Mandar Chandwadkar aka Bhide revealed, "The last 12 years of Being Bhide has up-skilled a lot of new things within me. From inculcating discipline to becoming an aware and responsible citizen. We now aim for achieving bigger milestones and greater success. The journey to this day was not an easy task, every single person on the set be it in the front or behind the camera has worked really hard to achieve this success. I thank Asit Bhai for everything and will always make him proud."

Samay Shah who plays Gogi in the sitcome, revealed, "Gokuldhaam Society is home to us. There wasn't a single day over the last 3000 episodes when we didn't enjoy our work. If I were to express how I feel being part of this team in one word, then it would be 'FUN'. Asit Sir and the team have always supported us – Tapu sena. There was an unexpected break in our shootings due to the lockdown, but now as we are back we promise the audience lots of surprises and great entertainment. I, on behalf of the whole Tapu sena thank viewers for the love all through these years."

(The above story first appeared on LatestLY on Sep 25, 2020 09:59 PM IST. For more news and updates on politics, world, sports, entertainment and lifestyle, log on to our website latestly.com).