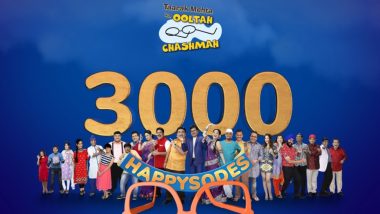 SAB TV's iconic daily comedy show – Taarak Mehta ka Ooltah Chashmah will be soon reaching the 3000 episodes mark. The show that premiered in 2008, has become the country's favourite sitcom, entered the 13th year of its almost uninterrupted 12 year run, this year. With 3000 episodes, the show is all set to cross another major milestone on 24th September 2020. The show’s success is also attributed to its close connection with the Indian society which it represents through its storyline and its characters. #TMKOC Becomes The Top Trend On Twitter After Taarak Mehta Ka Ooltah Chashmah Fans Post Funny Memes Welcoming The Show's Fresh Episodes!.

“To Taarak Mehta Ka Ooltah Chashmah's audiences, fans and its supporters, I thank you with all my heart. Every milestone that the show achieves is a matter of pride not just for us but for the entire nation which brings us great joy. We will be completing 3000 happysodes on 24th September 2020 and this brings with it a feeling that I cannot effectively express in words," says Asit Kumarr Modi, the show's producer. Taarak Mehta Ka Ooltah Chashmah Actor Dilip Joshi On Resuming Shoots 'At The End Of The Day You Are Mentally Drained'.

The continued, "For the first time in twelve years, the airing of the show was interrupted for a couple of months due to the unfortunate lockdown. Through this time too, our viewers and well-wishers stood by us and supported us. Now that we are back on, our commitment to keep creating great content ingrained in social values, and spreading happiness and positivity through the show remains right at the top,” Creator of the show.

A well-rounded show, Taarak Mehta Ka Ooltah Chashmah effectively captures all emotions and embodies the social fabric of our country. Says Asit, "3000 episodes is a significant milestone but at the end of the day, it still is just a number. We aspire to carry on entertaining and spreading social awareness amongst our viewers with the same dedication and passion like we have for the last 12 years."

"Taarak Mehta Ka Ooltah Chashmah is the world's longest running daily family comedy show because of the entire team’s efforts and commitment. I also thank each and everyone associated with the show who has contributed to its huge success,” concludes Mr. Modi.

(The above story first appeared on LatestLY on Sep 22, 2020 08:48 PM IST. For more news and updates on politics, world, sports, entertainment and lifestyle, log on to our website latestly.com).