The Korea Spotlight, which ran for around 30 minutes on Netflix YouTube channel, also showcased the teaser Hellbound, a series directed by Yeon Sang-ho known for blockbuster films like Train to Busan and Peninsula. 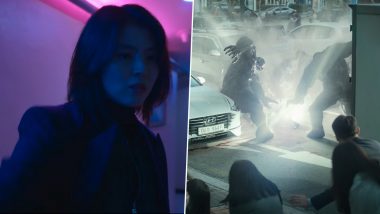 Streaming platform Netflix on Saturday treated ardent fans of Korean dramas with exclusive footage from upcoming shows like My Name and Hellbound and introduced new titles like Juvenile Justice and All Of Us Are Dead. Part of the "contactless" global fan event TUDUM, the 'Korea Spotlight' was a pre-show virtual presentation which gave an insight into Korean content, which has taken the world by storm with the rise of streamers. Netflix TUDUM 2021: Chris Hemsworth Returning for Extraction 2; First Look From Many Films and Show Unveiled (Watch Videos).

Looks of new shows like The Hungry and the Hairy; The Silent Sea, sci-fi mystery thriller starring Bae Doona and Gong Yoo; and Single's Inferno too were revealed. These titles will be available on the streamer in December. In 2022, legal drama Juvenile Justice with Korean star Kim Hye-soo in the lead and zombie horror series All Of Us Are Dead will be released in January. Red Notice at TUDUM 2021: Gal Gadot in a Red-Hot Dress Overpowers Dwayne Johnson and Ryan Reynolds in This New Action-Packed Clip from Netflix (Watch Video).

"Juvenile Justice" will see Kim Hye-soo, known for "Signal" and "Hyena", play the role of a judge for juvenile offenders. Kim Moo-yul, Lee Sung-min and Lee Jung-eun also round out the cast of the show. Based on a webtoon, "All Of Us Are Dead" is a drama centered on a high school where a zombie virus has spread. Romance drama Love and Leashes will be released in February. Song Kang, star of shows like Love Alarm, Navillera, Nevertheless and film "Sweet Home", took fans on a special virtual date to the Netflix office where he played a series of fun games. Song shared some secrets with his fans: He revealed he watches American police procedural comedy "Brooklyn Nine-Nine" whenever he feels down.

"I'd like to try playing the role of a nerd in a meaningless world. I'd like to try diverse roles," he added. The actor also said he will soon star in a new Netflix project. Next, Jung Hae-in, who recently starred in "DP", shared a vlog with fans which he shot for during the promotional shoot of his recently released Netflix series. In the clip, Jung said when he played the role of Private An Jun-ho in "DP" he paid a lot of attention to "not saying a word" to bring out the personality of a character who was troubled and quiet.

Check Out The Videos Below:

The series, which was released in August, tells the story of a team of Korean military police with their mission to catch deserters. "When I tried to portray An Jun-ho, what I paid a lot of attention to was not saying a word, but expressing my present emotion in other ways. I discussed a lot with the director. Since he's someone who is trapped, it was very difficult to express how he felt when he faced external stimulation," Jung said. Also known for shows like Something in the Rain, One Spring Night, and movie "Tune in for Love", the actor said he hopes to stay healthy in "both body and mind" to continue his job.

"When people tell me that they are enjoying the show and when I'm shooting on set and people send me coffee, delicious snacks, or even send me meals to support me during my acting, that's when I feel that I'm being loved. I realise that I have to do my best. I'm always thankful when I go on set. I love my family and I love my fans," Jung added. The Korea Spotlight event was hosted by Super Junior band member Kim Hee-chul and Exo band member Kai, who revealed the teaser of their upcoming variety series "New World", which which will see six participants learning how to survive in a remote location.

Other participants are "Vagabond" star Lee Seung-gi, rapper and "Reply 1997" actor Eun Ji-won, comic Park Na-rae, and "Tale of the Nine Tailed" star Cho Bo-ah. The show will start streaming on November 20. Kim Hee-chul described "New World" as not only a utopia where everything you dream comes true, but also a variety show with various episodes of carrying out exciting missions in the virtual world. "I am a bit dissatisfied with the teaser. They took out all the bad parts. Seriously, I was so miserable. I wanted to escape," he quipped. "It felt like I was shooting a sitcom because it was a series of surprising and fun situations," said Kai.

A thrilling uncut action sequence from the upcoming series "My Name" was also revealed at the event. "My Name" is an upcoming Korean series which will follow the journey of a revenge-driven woman, played by "Nevertheless" star Han So-hee, who puts her trust in a powerful crime boss (Park Hee-soon) following her father's murder. Also starring "Itaewon Class" star Ahn Bo-hyun, "Kingdom" actor Kim Sang-ho, "World of the Married" actor Lee Hak-joo, the series will be released on October 15.

Directed by Kim Jin-min of "Extracurricular" fame, "My Name" will have its world premiere at the 26th Busan International Film Festival (BIFF) in the inaugural 'On Screen' section in October. The segment was announced this year by the BIFF to "showcase highly anticipated drama series that will be streamed over online video streaming platforms". Celebrated Korean chef Paik Jong-won is also heading to Netflix next month with the show exploring Korean alcohol titled "Paik's Spirit".

The Korea Spotlight, which ran for around 30 minutes on Netflix YouTube channel, also showcased the teaser "Hellbound", a series directed by Yeon Sang-ho known for blockbuster films like "Train to Busan" and "Peninsula".The series, which release on November 19, is about a religious group propagating the idea of divine justice as otherworldly beings suddenly appear around the world and condemn individuals to hell. It stars popular South Korean actors Yoo Ah-in, Park Jeong-min, Kim Hyun-joo, and Won Jin-a. The series had its world premiere at the Toronto International Film Festival in September 9. It will also be screened in the 'On Screen' section at the BIFF.