Elizabeth Olsen, who is part of the show WandaVision, said that she wanted to change her surname initially, so people didn't associate her with her famous sisters Mary-Kate and Ashley Olsen. 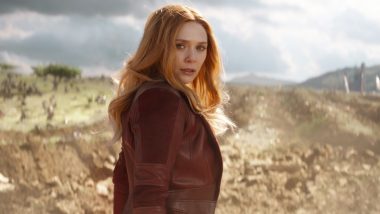 Actress Elizabeth Olsen, who is part of the show WandaVision, said that she wanted to change her surname initially, so people didn't associate her with her famous sisters Mary-Kate and Ashley Olsen. She said that she felt this pressure of not being recognised for her talent even when she was 10 years old. WandaVision Episode 9 Review: A Befitting but Predictable Finale for Elizabeth Olsen’s Disney+ Series That Gets Bogged Down by Fan Theories (LatestLY Exclusive).

"I was 10 and I was curious about auditioning... and I realised very quickly it wasn't for me because I was missing my sports teams, my dance class and all the extracurricular activities at school. But during that time, I thought 'I don't want to be associated with (Mary-Kate and Ashley)', for some reason. I guess I understood what nepotism was like inherently as a 10-year-old," she told Glamour UK magazine, according to a femalefirst.co.uk report. Elizabeth Olsen Birthday Special: 7 Moments of the WandaVision Star From the MCU That Are Simply Badass!

She added that even though she did not have a word for it, she realised that people thought she got things because of her background and not talent. "I don't know if I knew the word, but there is some sort of association of not earning something that I think bothered me at a very young age. It had to do with my own insecurities, but I was 10. So, I don't know how much I processed, but I did think, 'I'm going to be Elizabeth Chase (her middle name) when I become an actress'," she said.

(The above story first appeared on LatestLY on Apr 23, 2021 02:28 PM IST. For more news and updates on politics, world, sports, entertainment and lifestyle, log on to our website latestly.com).