Elizabeth Olsen Birthday Special: 7 Moments of the WandaVision Star From the MCU That Are Simply Badass!

Elizabeth Olsen is making a lot of waves these days thanks to her Disney+ series WandaVision. Olsen reprises her character of Wanda Maximoff from the MCU (Marvel Cinematic Universe) movies, who is better known as Scarlet Witch in the comics. 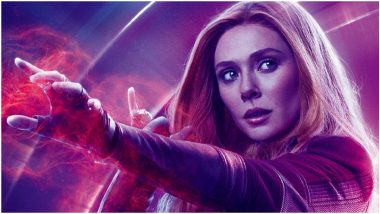 Elizabeth Olsen is making a lot of waves these days thanks to her Disney+ series WandaVision. Olsen reprises her character of Wanda Maximoff from the MCU (Marvel Cinematic Universe) movies, who is better known as Scarlet Witch in the comics. One of the most powerful characters in Marvel comics, Wanda has been part of the Avengers in MCU since the 2015 film Avengers: Age of Ultron (her first appearance was in the mid-credit sequence of Captain America: The Winter Soldier). From thereon, she has been in Captain America: Civil War, Avengers: Infinity War and Avengers: Endgame. WandaVision Review: A Terrific Elizabeth Olsen Owns The Show in Marvel Cinematic Universe’s Weirdest Offering Since Doctor Strange.

While we have seen Wanda grow as a character from an anti-hero to a guilted warrior to a scared lover to a vengeful hero, she never get to have the whole attention to herself. That changed with WandaVision, where the focus was completely on the love life of Wanda and Vision (Paul Bettany), as they settle for an idyllic suburban life that's sitcom material, that isn't ideal. However, throughout her appearances in MCU, we have seen some great glimpses of the character's badassery, that is bearing fruits in the six episodes of WandaVision we have seen so far. WandaVision Episode 6 Recap: From Pietro’s Real Identity to That Mind-Blowing Finale, 15 Questions We Have After Watching the Latest Episode of Marvel Series.

On the occasion of Elizabeth Olsen's 32nd birthday, let's look at the seven times her Wanda was the most badass in the Marvel Cinematic Universe.

When Wanda Proved She is an Avenger

All it took was Hawkeye's self-putting bow-and-arrow speech to stir up Wanda and turn an Avengers in a very badass manner!

When She Ripped Off Ultron's Heart

Ultron should have expected that, having killed her brother (albeit accidentally...)

When She Rebelled Against Vision...

When She Rescued Black Widow and Okoye...

We can't help but agree with Okoye when she asks, what she's (Wanda) doing up there (In Shuri's lab), when they were fighting Thanos' minions... Wanda could have single-handedly decimated his army!

When She Nearly Killed Thanos...

Like Jimmy Woo and Darcy pointed out if it was not for the Blitz, Wanda could have killed Thanos. And we would have an alive Tony Stark...

When She Broke Out of Her Own Reality...

When Wanda said, 'Stay Out of My Home', Hayward should have listened. Also it was a cool scene when she mind-controlled Hayward's men to train their guns on him. Magneto would have been proud.

That Ending Of Episode 6 (Before Smashing Her Twin)

Hayward didn't listen. Pietro made that bad 'dead husband' joke. And we now have a Wanda who can change the entire world into her reality if she so wishes!

(The above story first appeared on LatestLY on Feb 16, 2021 11:21 AM IST. For more news and updates on politics, world, sports, entertainment and lifestyle, log on to our website latestly.com).