WandaVision Episode 9 Review: A Befitting but Predictable Finale for Elizabeth Olsen’s Disney+ Series That Gets Bogged Down by Fan Theories (LatestLY Exclusive)

The ninth episode of WandaVision has dropped in on Disney+ Hotstar. The series brings the love story of Elizabeth Olsen's Wanda and Paul Bettany's Vision to its expected conclusion, while also setting up the future of Marvel Phase 4. 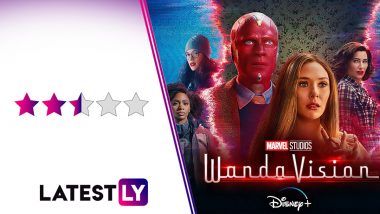 WandaVision Episode 9 Review: Blame it on the fan theories. Some, certain over-enthusiastic geeks made on their own. Some, the show and its actors themselves encouraged. Take those apart, and we might have had a very befitting conclusion to Marvel Cinematic Universe's first Disney+ series, that gives the doomed love story of Wanda Maximoff (Elizabeth Olsen) and Vision (Paul Bettany) a closure that it deserves. And also something we could have predicted right before the series began, if we were not distracted by the theories. Ah... I see what you did there, Marvel! Wandavision Finale: Disney+ Crashes, Leaving Twitterati Fuming!

My most favourite episode of WandaVision has been the penultimate one. It deconstructed what came by into the creation of the world Wanda created for her 'Happy Days' with Vision and the twins they created to be a family. We had seen the tears and pain behind those sitcom laughs, and it reiterated how Wanda is the most tragic hero among all the Avengers, seeing loss after loss in her personal life.

The conclusion of that episode, including its mid-credit scene, ramped up the expectations of what to expect in the finale. Agatha Harkness (Kathryn Hahn) refers to Wanda as the Scarlet Witch for the first time in MCU, and also introduces us to something called 'Chaos Magic'. The SWORD reveals their big secret - White Vision, built out of the remnants of the old one. And Monica Rambeau (Teyonah Parris) was conspicuous by her absence.

The big confrontation was set for the finale, as the first half of the episode is one big fight sequence. Wanda, Vision and the twins not only face Agatha's powerful, Dark magic and the murderous determination of White Vision, but also Hayward's SWORD team that manages to barge in. What's more, Wanda has to confront her own dark legacy, as well as the moral complications of keeping the residents of Westview as her mental prisoners. And of course, the finale also has to answer certain pertinent questions that the plot threads from the previous episodes have built on.

Sadly, for me, I had the same feels about the WandaVision finale the same way as I watched with a sunken feeling, the finale of Game of Thrones. And perhaps, I can only blame my own expectations for wanting to see a mountain instead of a contained mole-hill in the confines of the 'Hex'. (Some SPOILERS ahead)

So what we see here is two superheroes fighting their bad equivalents, which is of course, an old MCU trope. There are some interesting moments in the fight, but it wraps up pretty much on expected lines, and rather in an underwhelming manner. Especially Vision taking on White Vision, that ends with a discussion on Ship of Theseus (Ah, Vision, never change!) but then gives it an open conclusion.

Wanda and Agatha's fight is far more interesting, with a nice callback to an early interaction of theirs from the last episode. It is great to see Wanda getting more and more into her Scarlet Witch persona, creating some interesting implications about the future of the character in the MCU. Especially for Doctor Strange and the Multiverse of Madness, where Wanda is touted to come up next. Agatha Winking Viral Image From WandaVision Is Internet’s Latest Funny Meme Template!

But if you expect the series to answer what the heck was Agatha doing all this while, or how come she landed right there in WandaVision's first episode - you would be sorely disappointed. Pretty sure those who have read Marvel comics can make their own conclusions here. But for someone whose knowledge of Marvel lore has been solely dependable on Marvel movies - an ignoramus like me - there is a lot about the finale that left me wanting for more. And not in the right manner.

At least, the main plotline of Wanda and the Vision of her own making (let's ignore the underlying incest here) gets a lovely befitting finale, with some beautiful lines shared by the characters. But it plays out the same way as you expect their storyline to end. My fave scene of the episode is Wanda facing the Westview residents after the chaos is done, and thus recalling the fact that she once again can't escape the fact that she will always be someone to be feared. Just like a witch.

As for the supporting characters, each brings their own arcs to a disappointing, thoroughly underwhelming conclusions. Darcy (Kat Dennings) only has a single scene cameo, after which she disappears to God-Knows-Where. Jimmy Woo (a wasted Randall Park) is just there. Hayward (Josh Stamberg) goes out meekly, though he does go for a purported child-killing act.

Monica fares better, as we get to see more of her powers. It is just that they are played more for convenience purposes here, waiting for maybe Captain Marvel 2 to show more of that. As for that fake Pietro (Evan Peters) saga, let's say, keep your horses of wild imagination firmly tethered to the ground about Marvel bringing X-Men from another dimension.

So recapping the whole saga now, even without the expectations. I had enjoyed the whole WandaVision series, and liked the fact that two underused Avengers get their own storyline to expand their personalities (which also goes for Disney+'s next Marvel series, Falcon and the Winter Soldier). I had loved how the series had been built up till now using excellent callbacks to some nice sitcoms, and have become a huge fan of Elizabeth Olsen's acting.

Paul Bettany as Vision gets some beautiful lines - still a fan of 'What's Love, if not Grief persevering?' from the previous episode. And Kathryn Hahn made for a formidable foe, though it looks like we might never see her again. Also, WandaVision boasts of some excellent CGI for a TV series, and wonderful cinematography too.

It's only that after eight good episodes of fine blockbuster television, the skyrocketed expectations were left somewhat tattered by its finale. Some by our own doing - after all, Marvel never confirmed Mephisto would appear in the series, and he would be played by Al Pacino, out of all people!  Some, by the show's own cast and crew - who thought Bettany was referring to himself when he said an actor who he was dying to work with for years would make a cameo? Or who was that 'Aerospace Engineer' that Monica was referring to, as she just fell short of giving a wink to the camera?

PS - There are two post-credit scenes, each setting up plotlines for (I believe) Captain Marvel 2 or maybe Secret Invasion series, and Doctor Strange 2.

- Wanda and Vision's Story Gets A Nice Ending

- Wanda Dealing With The Implications of Her Actions

- Burdened By Its Own Expectations

Just my opinion solely on the finale of WandaVision - but the conclusion did left me heartbroken in more than one way. The show deliberately left me in a sad place with the conclusion to its main love story, but it also inadvertently left me underwhelmed in fitting the rest of the pieces of the puzzle. But then perhaps, WandaVision was throwing another television trope at us - that huge shows most likely get burdened by their own finales. If that's the case, then well played, Marvel! WandaVision is streaming on Disney+ (Hotstar in India).

(The above story first appeared on LatestLY on Mar 05, 2021 03:53 PM IST. For more news and updates on politics, world, sports, entertainment and lifestyle, log on to our website latestly.com).