I absolutely love stories that deal with stories of a society dealing with post-apocalyptic or dystopian tendencies. These stories have a certain flair to them where it’s the feeling of panic and chaos that fills the watcher with dread as society slowly crumbles. 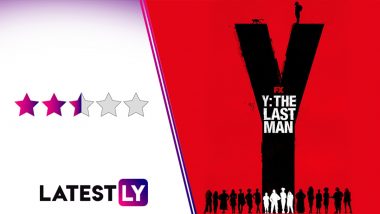 Y - The Last Man Review: (Review based on the first three episodes) I absolutely love stories that deal with stories of a society dealing with post-apocalyptic or dystopian tendencies. These stories have a certain flair to them where it’s the feeling of panic and chaos that fills the watcher with dread as society slowly crumbles. So why didn’t Y: The Last Man do it for me? Y: The Last Man is based on the highly acclaimed DC comic written by Brian K Vaughan and Pia Guerra and is adapted for television by Eliza Clark. Mj Rodriguez Says ‘This Is for Us’ After Her Historic Emmys 2021 Nomination in Lead Actress Category for FX’s Pose (Watch Video).

The show tells the story of how an event kills everyone with the Y chromosome in the world and at the center of it is the last cisgender male alive, Yorick Brown. His character is kind of a loser actually and Ben Schnetzer plays it rather well. Honestly most of the casting and acting here is quite well, especially of Diane Lane as Jennifer Brown and Ashley Romans as Agent 355.

The characters are good enough where they fit into the theme of the show, and honestly service the story well. No one character felt like an unnecessary addition to the show. Little Demon: Aubrey Plaza, Danny DeVito to Star in FXX’s Animated Horror Sitcom.

The concept of it is also what makes the show a bit intriguing and unique from other dystopian stories that we have seen in pop-culture. The story of how the last man is trying to get by in a world full of women is interesting enough. With Yorick’s story just being about him wanting to be with his girlfriend, it sort of makes it an interesting tale that while still having some underlying issues, makes you want to watch it. Sadly for the show, this is where the uniqueness ends though.

In the past two decades we have had an influx of tales showcasing collapse of society. The Leftovers, The Walking Dead, Avengers: Endgame, World War Z, and etc, all of these are about rebuilding and trying to exist in a broken world, and that’s where Y: The Last Man ultimately fails. The first episode does end with a bang, but there is this sense of familiarity looming over it and what exactly makes it so familiar? Well for starters, the comic isn’t light on humour at all and is what distinguishes itself from other similar tales. The show forebodes of the humour and rather opts for a more self-serious tone which just makes it seem more like a dud then it has to. There is no personality to it aside from Yorick’s tale and it ends up just being a rehash of everything that has come before it. The episodes just feel like something that was left on the conceive phase of The Leftovers rather than the comic that it was based on.

Even whenever the show takes the camera off from Yorick, it just turns into a bore as it suddenly become a political drama rather than a dystopian tale. The fall of society is ever present but its overlapped by political mumbo jumbo that just results in it being less interesting than it has to. The first episode is a serious offender of this as so much of it focuses on rooms filled with political adversaries. While the comic does hit on these themes, it still doesn’t let go of what’s important, and that’s Yorick’s story. Some real life elements are completely valid in a story but not at the cost of losing sight of its actual plot.

The show also takes certain liberties with a few of the comics concepts, which work and some just completely fall flat on its face. The one that works though is that all trans men are alive due to them not having the Y chromosome, and that’s the kind of inclusivity that I appreciate. Cause trans men weren’t represented in the comic so I can appreciate the show working around its pillars to make it more inclusive. And it also adds a nice bit of a fair to the plot. Hopefully the show focuses more on Yorick in the later episodes and make his redemption arc front and center.

-Forgoes the humour of the comics

-Story feels like a bit of a bore at times

Y: The Last Man while still being an appealing show, ultimately will disappoint you if you’re looking for a good dystopian tale. Hopefully the show improves going forward, but until them if you want to check out this project, then I would recommend sticking to the comic. Y: The Last Man is streaming on Disney+ Hotstar.

(The above story first appeared on LatestLY on Sep 15, 2021 10:05 PM IST. For more news and updates on politics, world, sports, entertainment and lifestyle, log on to our website latestly.com).