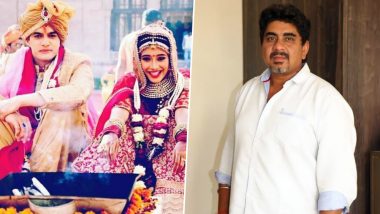 A few weeks back, when Yeh Rishta Kya Kehlata Hai's maha episode was telecast, the fact that Kartik (Mohsin Khan) introduced Naira (Shivangi Joshi) to Vedika (Pankhuri Awasthy) as his ex-wife, angered a lot of the show's loyal audience. The fan base started trending '#RIPDirectorskut' on Twitter and the trend picked up pace pretty quickly. A huge majority of fans were also angry with the fact that the makers had not only brought in a third person between Kartik and Naira but also that they had got Kartik re-married. Yeh Rishta Kya Kehlata Hai: Fans Trend '#RIPDirectorsKutProductions' After Mahaepisode Of The Show Where Kartik Introduces Naira As 'Ex-Wife'

And now, producer Rajan Shahi, addressing these rumours revealed to India Forums that he has been keeping a tab on all the comments and discussions happening on social media, but also clarified that he was not active on social media but also asked the fans to have some patience till the story builds up.

He says, "I leave it all to the Yeh Rishta Kya Kehlata Hai's team of writers and creative directors and they work amazingly as a team. One individual can not make a good show, a team can make good shows. Milna bichadna is a part of life. Pehle Akshara Niatik were the perfect pair who could never do wrong.  And when Kartik and Naira entered, they clicked with today's audience. Today's viewers like characters with flaws and in fact, Kartik and Naira are an imperfect couple and we could always experiment with them." Yeh Rishta Kya Kehlata Hai: ‘The Story Of A Girl and Guy’s Journey In An Arranged Marriage’ Really Worked – Rajan Shahi

When asked when will Vedika's track come to an end in the show, the producer answered, "A story has its journey and whenever my team or writers and creative directors see that the journey (Kartik and Vedika's) has come to its logical ending, then we will end it. Kartik met Naira after he married Vedika, so now the character's journey will be all about what Kartik will do and how he will react." Well, we'd like to tell you that it is being speculated that Pankhury Awasthy's character Vedika will soon turn negative and eventually exit the show.

Addressing fan disappointment, Rajan said, "I read all your reactions. In fact, when we were writing this track, there was lots of contemplation about getting a third wheel in the show and how would the audience reception be. And we completely understand the hatred coming our way, but the audience also needs to understand that right now they only know a part of the journey (Kartik-Vedika-Naira's) and not the entire story. Tomorrow when the track will reach its logical ending, they will be happy to see Kartik and Naira in a better place than before." Well, we too hope for the same.

(The above story first appeared on LatestLY on Aug 28, 2019 04:53 PM IST. For more news and updates on politics, world, sports, entertainment and lifestyle, log on to our website latestly.com).