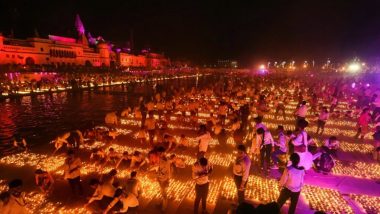 Uttar Pradesh Governor Anandiben Patel and Chief Minister Yogi Adityanath will attend the Deepotsav celebrations in Ayodhya. Besides Doordarshan National channel, the mega event will be broadcast live on public address systems and on 70 LED vans in Ayodhya. Security has been increased across Ayodhya and entry of outsiders has been banned for four days beginning Wednesday.

During the Deepotsav celebrations, drone cameras will monitor the movement of people in the holy city. "We will not allow any outsider to enter Ayodhya from Wednesday. We are maintaining a vigil in Ayodhya round-the-clock with the help of drone cameras. There is high security at all of the city's entry points and Saryu river routes," Ayodhya DIG Deepak Kumar said. Artists from the Lalit Kala Academy in Lucknow will showcase 25 sculptures of Lord Ram depicting different episodes from the epic Ramayana during the Deepotsav.

"As per the directions of Uttar Pradesh Chief Minister Yogi Adityanath, Deepotsav 2020 that will be held in Ayodhya, there are arrangements for virtual Deepotsav. Due to COVID-19, devotees who are unable to reach Ayodhya will be able to light a lamp in front of Sri Ram Lala Virajman through the website," a tweet from the Office of Chief Minister, Uttar Pradesh had said.

(The above story first appeared on LatestLY on Nov 13, 2020 03:34 PM IST. For more news and updates on politics, world, sports, entertainment and lifestyle, log on to our website latestly.com).