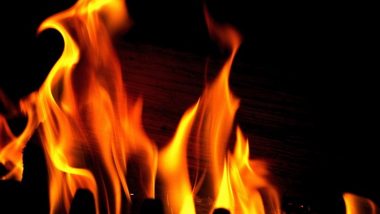 The incident happened on Tuesday night.

The employees of the petrol pump managed to douse the flame before it could catch fuel tanks underneath the surface. Four vending nozzles were gutted in that incident. Bihar: Woman Molested, Assaulted by Gang of Goons in Saran; 3 Arrested After Video Goes Viral

The incident took place at Ananya fuel station located at Tarban Mor under Banke Bazar police station in the district.

As per the statement of petrol pump employees, four goons arrived on two bikes and asked to fill the tanks of both the bikes.

When employees demanded money, the accused became angry and beat them. Instead of paying for the petrol, they demanded extortion (Rangdari) from them.

After the employees resisted and refused to give money, the miscreants set the vending nozzles on fire. They also set ablaze a school bus and a bike. The bus and the bike were parked at the petrol pump. After committing the crime, the accused fled from the spot.

The employees managed to douse the flame using fire extinguishers before it could spread to the fuel tanks.

"During investigation, the employees claimed that those goons demanded extortion from the fuel station owner in the name of KK Tiger," said Kumar Saurav, SHO of Banke Bazar police station.

"We have some leads about the alleged goons. They will be arrested soon," Saurav said

(The above story first appeared on LatestLY on May 18, 2022 12:39 PM IST. For more news and updates on politics, world, sports, entertainment and lifestyle, log on to our website latestly.com).