Train services were affected on the Patna-Kolkata route of the East Central Railway (ECR) zone due to an agitation at the Barhiya railway station in Bihar, officials said on Monday. 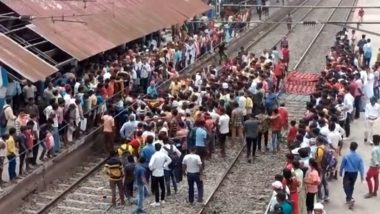 Patna, May 23: Train services were affected on the Patna-Kolkata route of the East Central Railway (ECR) zone due to an agitation at the Barhiya railway station in Bihar, officials said on Monday.

A large number of people have squatted on the tracks at the station, about 120 km from Patna. They are demanding stoppage for the Patliputra Express and a few other trains at the Barhiya railway station. They have blocked both up and down railway lines and are not allowing any train to pass through. Coal Crisis in India: Indian Railways Cancels 657 Mail, Passenger Trains to Prioritise Movement of Coal Rakes

Due to the protest ECR has cancelled over one dozen trains and diverted more than two dozen trains bound to Delhi, Kolkata, Guwahati and other parts of north Bihar and Jharkhand.

Virendra Kumar, PRO of ECR said: "Due to Dharna and protest at Barhiya railway station we have cancelled and diverted some trains. The negotiations with the protesters are currently underway."

Due to the protest, ECR has diverted Howrah - New Delhi Poorva Express and Howrah - New Delhi Duronto Express from Asansol, Dhanbad, Gaya and Deen Dayal Upadhyay Junction to go further toward New Delhi. These two trains from the down side New Delhi to Howrah will also use the same route.

The passengers of Patna - Kolkata main railway route were struggling to reach their desired destinations due to the agitation for the last 24 hours.

(The above story first appeared on LatestLY on May 23, 2022 12:09 PM IST. For more news and updates on politics, world, sports, entertainment and lifestyle, log on to our website latestly.com).