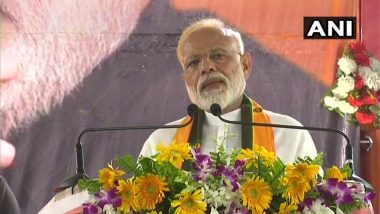 Hindaun (Rajasthan), May 3: The Centre has released Rs 1000 crores in advance to Odisha and other states to deal with the devastation caused by cyclone Fani, Prime Minister Narendra Modi said Friday. Addressing an election meeting here he said many families were battling cyclone. Odisha, Andhra Pradesh, West Bengal, Tamil Nadu and Puducherry governments were in touch with the Centre."I am in regular touch with these states. Rs 1,000 crore for relief work has been released as advance to deal with the situation. I want to assure that the whole nation and the Centre is with all those families and governments. Cyclone Fani Live News Updates: Restoration Worked at Bhubaneswar Airport Underway, Aircraft Movements Expected by 1 PM Tomorrow.

He also said battling the adversity together is the hallmark of 'Ek Bharat Shresth Bharat'.The severe cyclonic storm Fani with a wind speed touching nearly 200 kmph made landfall earlier today on wreaking havoc in Odisha.