The Aam Aadmi Party (AAP)-led Delhi government on Saturday announced a compensation of Rs one crore each to the families of six persons, who were residents of Delhi, and were killed while performing their duty. 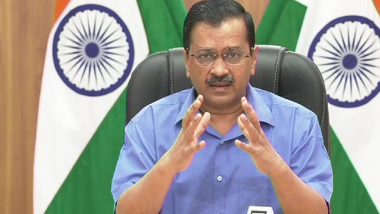 New Delhi, June 19: The Aam Aadmi Party (AAP)-led Delhi government on Saturday announced a compensation of Rs one crore each to the families of six persons, who were residents of Delhi, and were killed while performing their duty.

Of the six people who lost their lives, three belonged to the Indian Air Force (IAF), two were Delhi Police personnel and one was part of Civil Defence.   Delhi CM Arvind Kejriwal Announces Rs 50,000 Ex-Gratia For Each Family That Lost Member to COVID-19, Rs 2,500 Pension For Those Who Lost Breadwinner; Check All Announcements

Announcing the ex-gratia amount, Deputy Chief Minister Manish Sisodia said, "To honour our personnel who risked their lives to protect and serve the nation, Delhi Government has announced disbursal of ex-gratia amount of Rs 1 crore to families of 6 personnel who passed away while performing their duties. The decision to support the families was taken at today's (Saturday) meeting."

Martyrs whose families will be given ex-gratia of Rs 1 crore are:

Sanket Kaushik - (ACP) Delhi Police who lost his life while performing duty at Rajokri Flyover in Delhi. A truck hit him while he was checking vehicles around the area and he died on the spot.

Rajesh Kumar, a resident of Safdarjung lost his life while performing his duty in the Air Force. He was on an aircraft which took off from Jorhat in Assam and its wreckage was found in Arunachal Pradesh. His body was found subsequently. He had only been married for three months.

Flt. Lt. Sunit Mohanty, a resident of Dwarka was in the same flight with Rajesh Kumar and he also died in the crash.

Meet Kumar, a Squadron Leader in the Indian Air Force (IAF) died when his aircraft MiG-21 crashed during an operational sortie in the Kangra hills in Himachal Pradesh.

Vikas Kumar, who was a Delhi Police Constable, was performing picket duty when the driver of a Swift car deliberately increased the speed when asked to stop and the car hit and injured Kumar. He was shifted to AIIMS where he was pronounced dead.

Pravesh Kumar, a Civil Defence Personnel was performing his duty at Mangolpuri flyover when a truck hit and crushed him.a

(The above story first appeared on LatestLY on Jun 19, 2021 08:52 PM IST. For more news and updates on politics, world, sports, entertainment and lifestyle, log on to our website latestly.com).