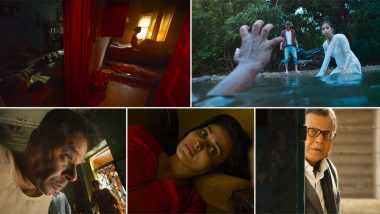 The footage makes the film look interesting. The text before the footage says that the film will deal with paranormal, as well as science.

RGV is a master of horror with amazing films like Bhoot, Raat, Phoonk, Darna Mana Hai, and Vaastu Shastra. There have also been bad movies like Agyaat and Phoonk 2 and Bhoot Returns. The house in the film is not lavish or spacious as in some of RGV's horror films.

At the thick of this horror film is a small dingy house. Fresh. Also, the footage barely gives us an idea about the plot, so we will have to look forward to other promotional material for more info.

The filmmaker has dropped the trailer on the 22nd anniversary of his pathbreaking crime drama, Satya. Manoj Bajpayee Looks Back at 'Life Changing' Satya on 22nd Anniversary: 'Can't Forget It Was Declared a Flop'.

Check Out The Trailer For 12 "O" Clock Here:

12 "O" Clock stars Mithun Chakraborty, Makrand Deshpande, Flora Saini, and Manav Kaul in lead roles. Amit Sadh has also been credited in some reports. The release date has not been announced yet. But we are looking forward to this one.

(The above story first appeared on LatestLY on Jul 03, 2020 08:39 PM IST. For more news and updates on politics, world, sports, entertainment and lifestyle, log on to our website latestly.com).