Manoj Bajpayee Looks Back at 'Life Changing' Satya on 22nd Anniversary: 'Can't Forget It Was Declared a Flop' 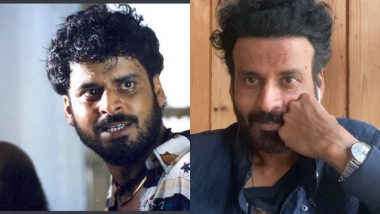 Before Ram Gopal Varma transitioned into making films like Naked and Climax, he was making pathbreaking movies like Satya. While cinema buffs remember the film fondly, actor Manoj Bajpayee reminded us of the stark reality on Satya's 22nd anniversary. The movie was declared a flop upon its release but soon things turned around as the movie refused to get off the screens. Also, it went on to gain this crazy cult status over the years. The movie also gave us Manoj as Bhikhu, who was appreciated more than the lead actor J. D. Chakravarthy. Manoj Bajpayee on Nepotism Row: 'As An Industry We Celebrate Mediocrity'.

Manoj took to his Instagram page to share a picture from Satya. He wrote, "And my life changed...!!! Can’t forget the 3rd July 1998 ..monsoon..it was declared a flop and how it turned out to be biggest hit ..ran for 25 weeks..!!satya!!!" Mrs Serial Killer Actor Manoj Bajpayee Feels Shirish Kunder's Films 'Grow On The Audience Over Time'.

And my life changed...!!! Can’t forget the 3rd July 1998 ..monsoon..it was declared a flop and how it turned out to be biggest hit ..ran for 25 weeks..!!satya!!! Edited by Apurva Asrani (19 years then) Written by Anurag Kashyap (23 years then) And Saurabh shukla directed by THE RGV music by Sandip Chowta!!

The movie was edited by Apruv Asrani, written by Anurag Kashyap and Saurabh Shukla, who are all mentioned by Manoj in his post, including musician Sandip Chowta.

Talking about Satya, Ram Gopal Varma has said, in an interview in 2019, "For me the content of that is not important to the script, I wanted it as a diversionary tactic for when the bullet will come out of the blue. See, when a film becomes a cult, you want to hear every detail about it, but to be honest none of us realised the film will be received the way it was. We’d taken it like just one more film…it took its own shape… We didn’t make Satya, it made itself."

(The above story first appeared on LatestLY on Jul 03, 2020 05:28 PM IST. For more news and updates on politics, world, sports, entertainment and lifestyle, log on to our website latestly.com).