Kerala Finance Minister K.N. Balagopal on Tuesday denied any plans to raise the retirement age of the state government employees. 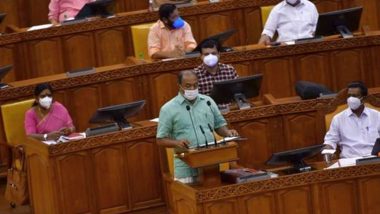 "Even though this is one way to stabilise the financial position of the state, we have no plans to increase the retirement age," said Balagopal to the media.  Kerala: Young Woman Found Hanging at In-Laws' House in Kollam, Cops Suspect Suicide Over Dowry Harassment

Incidentally, Kerala is the only state where the government employees retire at age 56, while in all other states the retirement age is higher and in some states it's 60.

Even though successive governments in Kerala have been mulling about this, with over four million unemployed youths waiting for a job, no government has done anything in this regard.

The state government has five lakh employees and an equal number of pensioners. A major part of the government's revenue goes to the payment of salaries and pension.

In the past, there have been serious thoughts to increase the retirement age as it was the Oommen Chandy government (2011-16) towards the fag end decided to make 56 years as the retirement age for all its employees whether school, college teachers or others.

Along with this decision, the Chandy government also decided that all new government employees from henceforth will retire at age 60. But the employees will have only the contributory pension and not the statutory pension scheme.

Incidentally, in 2016, the Left Democratic Front in their election manifesto had promised that 'they would revert back to the statutory pension scheme' and had appointed a committee to study that.

"The committee's report is there with us and we will be studying that to decide on what needs to be done," said Balagopal.

One reason why there has been talk of increasing the retirement age of state government employees, is, even if it is raised by one year, the state government can postpone the payment of terminal benefits for the retiring employees which will amount to close to Rs 2,000 crore.

Balagopal when asked if the state government is planning to appoint a panel of experts like Tamil Nadu did on Monday, he said even though no panel is going to be appointed, they often speak to experts in all fields for technical advice.

(The above story first appeared on LatestLY on Jun 22, 2021 03:48 PM IST. For more news and updates on politics, world, sports, entertainment and lifestyle, log on to our website latestly.com).