A shopkeeper alleged that he was cleaning his shop when a group of men forced him to pull the shutters down. He claimed that he was thrashed when he did not pay heed to the threats. 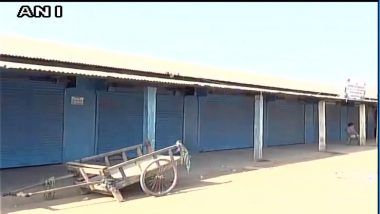 Gurugram, October 11: Meat shops across Gurugram were forcibly shut down by members of the Sanyukt Hindu Sangarsh Samiti (SHSS) on the first day of Navaratri on Wednesday. The SHSS is a group of 22 local units of right-wing organisations. The members of the Hindu outfit claimed that the district administration had proposed to shut down the meat shops for nine days during the Navaratri period. However, due to non-cognisance, the members took to the streets to protest against the same. Navratri 2018 Dates, Days & Tithi Calendar: Shubh Puja Muhurat & Time for Aarti During Nine-Day Sharad Navaratri Festival.

A shopkeeper alleged that he was cleaning his shop when a group of men forced him to pull the shutters down. He claimed that he was thrashed when he did not pay heed to the threats. "I was cleaning my shop after opening when a group of men approached and threatened me to pull the shutters. When I refused to do, I was thrashed by them. I have a proper commercial license as well," the shopkeeper said. Navaratri 2018: From Durga Puja to Dussehra, Check How the 9-Day Sharad Navratri Festival is Celebrated in 9 Different Ways in the Country.

Another shopkeeper said that they did not receive any order from the administration in this regard. He said, "These organisations had earlier said that they have no problem. But now, they are forcing us to close our shops. We will protest against this injustice. We have not received an order from the administration requesting us to shut down our shops. But if it comes, we will close our shops in these nine days."

Meanwhile, Deputy Commissioner of Gurugram, Vinay Pratap Singh, said that strict action will be taken against those who tried to forcibly shut down the shops. He stated, "The municipal corporation is doing their routine exercise on cracking down on meat shops. Such incidents should not be connected to Navaratri. If anyone tries to forcibly close any shop and take the law into their own hands, it is an offence and strict action will be against such people." Last year, the local unit of the Shiv Sena activists took to the streets of Gurugram, closing down meat shops for the Navratri festival. Navratri 2018: Fasting for Navaratri? Here Are Some Mouth-Watering Kuttu Ka Atta or Buckwheat Flour Recipes.