Navaratri 2018: From Durga Puja to Dussehra, Check How the 9-Day Sharad Navratri Festival is Celebrated in 9 Different Ways in the Country 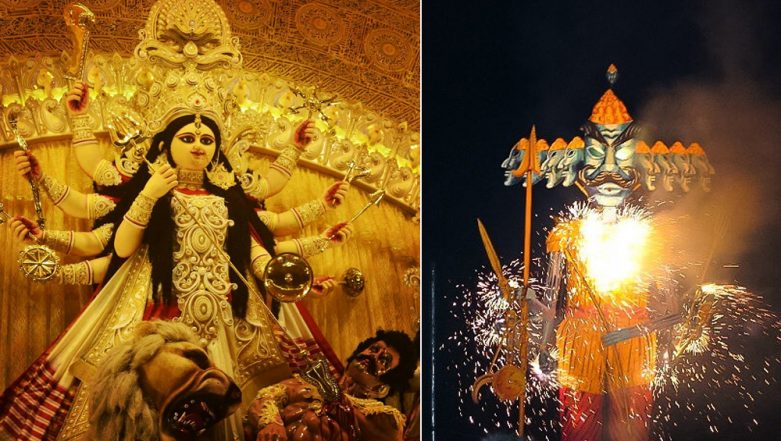 As the festival of Ganeshotsav 2018 saw an end, people started gearing up for the next big Hindu festival of Navaratri. The 9-day festival of Navratri 2018 is starting from October 10 this year and will conclude with Dussehra or Vijayadashmi on October 19. The festival of Sharad Navaratri worships the Goddess Durga and her nine forms on each of the days in particular order. There is a schedule followed accordingly and the dates of Navratri celebrations also differ from one state to another. The word literally translates to 'nine nights.' Know about the Navratri 2018 calendar and how it celebrated in different parts of the country. Navratri Colours 2018 for Nine Days: List of 9 Colours for Each Date to Wear During Sharad Navaratri Festival.

Being a multi-religious and multi-lingual country, India prides in the way we carry out different rituals and tradition. Each festival in India sees its own unique way of celebrations from one community to another. So although the element of worship remains common, the forms and rituals differ from state to state. And let us tell this 9-day festival is celebrated in 9 different ways according to the state borders. So you might have commonly heard of Durga Puja in the East or Kolu in the South, Navaratri sees varied celebrations from state to state.

Navratri Dates and Celebrations in Different Parts of the Country

The very common associations of the festival of Navaratri are with the Gujarati community. Yes, Navaratri is the main festivals in the state and is categorised with performing the Garba dance. The Gujarati community observes a fast during the 9 days to revere the Shakti goddess. On all the days, women come together in groups and perform a traditional dance known as Garba. The important part of celebration here is a clay pot called garbo, symbolic of a womb of the family and universe. Navaratri 2018 Dates & Tithi Calendar: Shubh Muhurat & Time for Puja and Aarti During Nine-Day Sharad Navratri Festival.

Women dance around in circles and the folk dance has become very popular across other states in the country. Along with garba, women play dandiya (sticks) with well-coordinated movements of striking the sticks against each other. Navratri 2018: Different Types of Garba, Dandiya & Step by Step Dance Tutorials (Watch Videos).

Just as Navaratri creates a buzz in the state of Gujarat, it is in a much grander scale celebrated as Durga Puja in West Bengal. Also called Durga Pujo, it will be celebrated from October 15 to October 19 prominently in the states of West Bengal, Bihar, Odisha and Assam. The last four days called Saptami, Ashtami, Navami and Dashmi are the biggest days for the Bengali community. It is a time commemorating the killing of demon Mahishasur by Goddess Durga. Durga Pujo is celebrated with much pomp as elaborate decorations are made across pandals. Bengali women engage in Sindur Khela as a part of their rituals, happily bading to Goddess Durga. People from across the country make a point to head to these states to experience the vibe and enthusiasm of Durga Puja.

Navaratri or Nadahabba in Karnataka

The popular celebration of Navaratri in the state of Karnataka involves lighting up the Hindu temples with a lot of colourful lights and diyas. There are also regal processions held across different districts. Also called the Mysore Dasara, the celebration will go along on the same days of Navratri. The last day, October 19 is called as Vijayadashmi. The city of Mysore sees a great procession on this day.

In the states of Andhra Pradesh and Tamil Nadu, the festival of Navratri is called as Kolu or Golu or Bombe Habba. The ritual worships goddesses Saraswati, Parvati and Lakshmi.  During this festival, colourful dolls are put on a display in a specific manner. They are a representation of gods and goddesses from folktales. These are wooden dolls which are arranged on a tier of 7, 9 or 11. Families visit each other to see the Golu display and there is a feast arranged for the visitors.

The celebrations of Navratri in Kerala majorly surround the last three days. While most of the states have elaborate celebrations for all 9 days, in Kerala the last three days are important. Dedicated to Lord Saraswati, the deity of knowledge on these three days books are worshipped. Kerala holds the repute of being the most educated state so the traditions for Navaratri also revolve around the concept of knowledge and education.

The North of India sees distinctly different celebrations from the South. A major characteristic of Navaratri celebrations in North India especially in Delhi, UP, Bihar and Madhya Pradesh are the Ramlila events. Episodes from the epics of Ramayana are enacted by artists and people gather in crowds to experience them. In different parts there are different events arranged, depicting stories from the epic. On the day of Dusshera, an effigy is prepared of Ravana and burnt to celebrate the victory of Lord Rama over the evil. There are fairs arranged to gather people together and be a part of the celebrations.

The celebrations of Navratri in Maharashtra are very similar to that of Gujarat. It is said to be a good time to make new purchase- property, car or business deal. The first day celebrated as Ghatasthapana has a ritual of gathering foodgrains in a clay pot. This pot is offered prayers for the next nine days and the grains are collected later. The festival is divided in the worship of three different goddesses. Goddess Kali is worshipped on first two days, Lakshmi Puja is performed on the next three days and on the last four days, Goddess Saraswati is prayed.

Navaratri or Navratras in Punjab

People of Punjab people keep a fast for the first 7 days of Navratri and ends on Ashthami or Navami. The ritual has the worship of 9 little girls and boy called as Kanjika or Kanjak devis. An important part of the celebration is organising of jagrata. A jagrata is where people stay awake the whole night and sing devotional songs and some perform dance. People keep a bhandara to feed the poor and serve them with a feast. When is Dussehra 2018? Confusion Over Date - Vijay Dashmi on October 19, Public Holiday on October 18.

One of the notable celebrations for Navaratri are in this state. As other states reach the end of celebrations, in Himachal Pradesh, the tenth day is very important. It is celebrated as Kullu Dussehra, the day of the return of Lord Ram to Ayodhya. There are processions with idols from the temples are held across the state. Goddess Durga is primarily offered worship. Local Hindu families have a get-together and offer collective worship and seek blessings for the family.

The list may go on if we include some of the regional celebrations and rituals. So it a point to show that how much Navratri is celebrated all over the country and the traditions differ from one state to another. As the enthusiasm has already kicked in, people are up for welcoming the Goddess and performing elaborate worship.