A Pawan Hans helicopter ditched into the Arabian Sea waters near the ONGC's Sagar Kiran oil-rig, off Mumbai High Fields, around 175 km off the country's commercial capital, official sources said here on Tuesday. 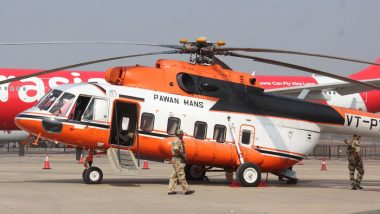 Earlier, 5 were rescued from the sea-water and within the next couple of hours by 1400 hours, all the nine were safely saved, said officials.

The rescue operation comprised ONGC's offshore supply vessel Malviya-16 and a boat from the oil rig Sagar Kiran, while the Indian Coast Guard deployed its helicopters to drop rafts near the chopper and the Indian Navy sent an ALH and a Sea King chopper in the efforts.

The cause of the emergency landing on water, whether related to weather or technical issues, is not immediately clear and further details are awaited, according to ONGC officials in Mumbai and New Delhi.

(The above story first appeared on LatestLY on Jun 28, 2022 03:24 PM IST. For more news and updates on politics, world, sports, entertainment and lifestyle, log on to our website latestly.com).