Sharad Pawar meets Amit Shah in Delhi. Later, Pawar himself sought to clear the air, terming it an official meet. 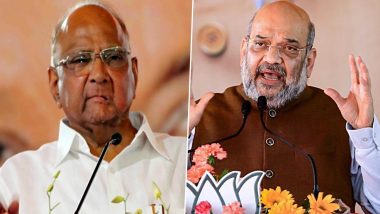 Pawar himself sought to clear the air, terming it an official meet. "Had a brief meeting with Union Co-operation Minister Shri Amit Shah in New Delhi today along with Shri Jaiprakash Dandegaonkar, President of NFCSF (National Federation of Cooperative Sugar Factories Ltd) & Prakash Naiknavre to discuss issues faced by the sugar co-operative sector," he said.

The meeting gained significance as it came on the same day as Pawar's daughter Supriya Sule attended the breakfast meeting of opposition leaders hosted by Congress leader Rahul Gandhi.

The Congress and the Shiv Sena, who are the Nationalist Congress Party's allies in the Maharashtra, however, dismissed any political significance of the meeting.

The meeting came a day after Shiv Sainiks went on a rampage, tearing down a brand new hoarding erected by the Adani Airport Holding Ltd (AAHL) outside Mumbai's Chhatrapati Shivaji Maharaj International Airport (CSMIA) to protest against what they alleged was AAHL's unilateral move to abruptly 'change' the name of CSMIA and replace it with the Adani Group brand name.

Pawar has been meeting the ruling party leaders and ahead of monsoon session on July 17, met Prime Minister Narendra Modi and talked for about 50 minutes, the Prime Minister's Office said.

The meeting took pace amid reports over fissures in the Maha Vikas Aghadi (MVA) coalition government in Maharashtra.

(The above story first appeared on LatestLY on Aug 03, 2021 06:43 PM IST. For more news and updates on politics, world, sports, entertainment and lifestyle, log on to our website latestly.com).