'382 Doctors Dead in Fight Against COVID-19': IMA Sends Letter to Govt, Says No Other Nation Lost As Many Health Workers 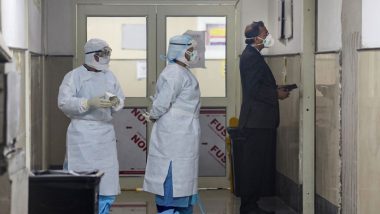 New Delhi, September 16: The Indian Medical Association (IMA) sent a strongly-worded letter to the government, marking its dissent over the assertion made by the Union Health Ministry that it has no collated data on the death of health workers amid the COVID-19 pandemic. The top medical body claimed that it has recorded the death of 382 doctors since the outbreak of virus in India. No Data on Migrant Workers' Deaths, Injuries And Job Losses During COVID-19 Lockdown, Says Government.

The IMA accused the Centre of showing indifference to the medics sacrificed their lives for saving the patients who contracted the lethal coronavirus. The medical body demanded the government to "treat them as martyrs" for their sacrifice for the nation in the midst of a pandemic.

"IMA hereby publishes the list of Indian doctors who died in the pandemic due to COVID-19. We demand they be acknowledged and treated as martyrs. Their families and children deserve solace and from the government," said the letter signed by IMA president Rajan Sharma.

The Association also accused the government of showing "hypocrisy" by referring to the medics as corona warriors, but also claiming that there is no data available on those who have died while combating the outbreak of coronavirus in the nation.

"If the Government doesn’t maintain the statistics of total number of doctors and health care workers infected by Covid 19 and the statistics of how many of them sacrificed their life due to the pandemic, it loses the moral authority to administer the Epidemic Act, 1897, and the Disaster Management Act," said the letter which was disclosed in form of a press release by the IMA.

"This also exposes the hypocrisy of calling them corona warriors on one hand and denying them and their families the status and benefits of martyrdom," Sharma was further quoted as saying in the letter.

The controversy was triggered when Ashwini Kumar Chaubey, the Union Minister of State for Health, told the Parliament that there is no collated data on the death of health workers due to COVID-19. This led to an uproar among members of the medical fraternity who accused the government of exhibiting apathy towards the selfless sacrifice of doctors.

(The above story first appeared on LatestLY on Sep 16, 2020 11:19 PM IST. For more news and updates on politics, world, sports, entertainment and lifestyle, log on to our website latestly.com).