The densely-packed slum tamed coronavirus and contained it even as cases surged elsewhere in Mumbai and other parts of Maharashtra. The ACP was declared dead at a private hospital in suburban Kandivali on Thursday morning, police said. He is survived by his wife and three children. 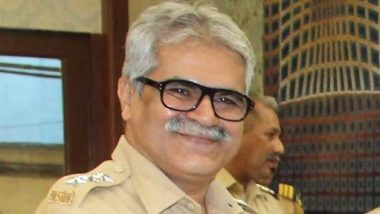 Mumbai, March 12: Ramesh Nangare, Assistant Commissioner of Police (ACP) of Mumbai's Sakinaka division, who played a key role in curbing the spread of coronavirus in Dharavi slums, died of cardiac arrest on Thursday. The 55-year-old ACP was the man behind enforcing the COVID-19 lockdown measures in  Asia's biggest slum in Mumbai- Dharavi. The densely-packed slum tamed coronavirus and contained the virus even as it surged elsewhere in Mumbai and other parts of Maharashtra. The ACP was declared dead at a private hospital in suburban Kandivali on Thursday morning, police said. He is survived by his wife and three children.

According to details by Police, Nangare had completed his day’s duty and stayed back for the night duty. In the night, he felt discomfort and returned to his home in Gorai at 5 am on Thursday. Around 10 am, he suffered a heart attack, following which his family members rushed him to a hospital where he breathed his last.

Nangare was posted to the Dharavi police station as senior police inspector when the coronavirus pandemic broke out in Mumbai. He was managing the team during the peak COVID-19 times in March 2020. Dharavi, that became a hotspot of the outbreak, managed to flatten the curve by the measures imposed by Nangare. He single-handedly managed the police station even as 60 personnel under him tested positive for the infection.

Nangare, the 1989 batch police officer, was appreciated for his impeccable work, excellent management, and strategies to contain the spread of the deadly virus that helped flatten the infection curve there. Nangare was recently promoted as an ACP. He had also earned praise from Home Minister Anil Deshmukh for his exemplary work.

(The above story first appeared on LatestLY on Mar 12, 2021 11:45 AM IST. For more news and updates on politics, world, sports, entertainment and lifestyle, log on to our website latestly.com).