Antony said that the Congress party is the only one in the opposition which has a pan India presence in every village, where one can find at least 10 Congress workers. 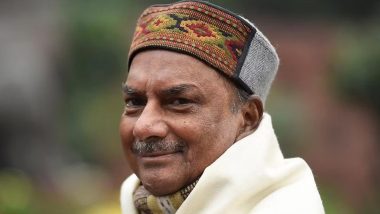 Thiruvananthapuram, May 3: Senior Congress leader and former Defence Minister, A.K. Antony on Tuesday called on all the small and big political parties in the country to come on a common platform to oust the BJP from the Centre.

"The need of the hour is to oust the anti-people BJP government and for that, all the small and big political parties should unite and come on to a common platform. And for that the Congress should take the lead. All should move together to achieve this. But 'some' people are saying that this can be done without the Congress party. What can be said to such people," he said, in his first political speech after shifting base from Delhi to Thiruvananthapuram. Sri Lanka Economic Crisis: 'Tamil Nadu Government Will Send Rice, Milk Powder, Medicines to Sri Lanka', Says CM MK Stalin.

In his address after inaugurating the platinum jubilee celebrations of the INTUC, the trade union wing of the Congress, here, he said that the Congress party is the only one in the opposition which has a pan India presence in every village, where one can find at least 10 Congress workers.

"But the Congress is well aware that this alone will not help and to achieve that, the upcoming Chintan Shivir to be held in Rajasthan will chart out appropriate plans to achieve the objective of dislodging the BJP from the Centre," added Antony.

The 81-year-old ended his Delhi sojourn when his Rajya Sabha term ended last month and arrived here, last week and announced that his future base of work for the Congress party will be done from here.

(The above story first appeared on LatestLY on May 03, 2022 08:49 PM IST. For more news and updates on politics, world, sports, entertainment and lifestyle, log on to our website latestly.com).