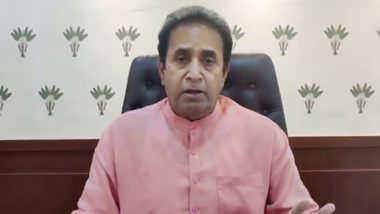 Mumbai, November 12: A Special PMLA Court here on Friday extended by 3 days the Enforcement Directorate (ED) custody of former Maharashtra home minister Anil Deshmukh, nabbed 10 days ago in an alleged money-laundering case. Strongly contesting the ED plea, Deshmukh's lawyers Vikram Chaudhri and Aniket Nikam said that the former minister appeared before the ED voluntarily and even agreed to be in ED's extended custody though he had been granted judicial custody last week.

Arguing before Special Judge H.S. Satbhai, they questioned why the chargesheet was filed without arresting dismissed cop Sachin Vaze, the prime accused, who played a key role but remains 'accused' only on paper. Chaudhri and Nikam also asked why the former Mumbai Police Commissioner Param Bir Singh -- currently untraceable -- has not been summoned for probe to record his statement. PMLA Case: Anil Deshmukh Releases Statement On Twitter With Caption 'Satyamev Jayate' After He Appears Before Enforcement Directorate.

"The country is passing through a phase where chaos and anarchy prevail, and the judiciary is the only saviour... The idea is to tire out Deshmukh... The ED seeking further custody is proof that all is not fair and they are acting with malice," Chaudhri said. Making a plea for extending Deshmukh's custody, ED Special Public Prosecutor Shriram Shirsat submitted it was needed since new facts have emerged in the case which need to be probed.

Further, he contended that Vaze, the accused in the same case, is currently in Mumbai Police custody till Saturday. The ED would move a fresh plea seeking Vaze's custody so that he could be confronted with Deshmukh, as the latter has been giving evasive replies. Deshmukh who went for the ED probe on November 1, was arrested in the early hours of November 2 and has been in custody since then. Anil Deshmukh Being Taken For Medical Examination From ED Office.

Last Sunday, the Bombay High Court had set aside the Special Court order granting Deshmukh judicial custody for 14 days and sent him back to the ED custody till November 12, and now extended till November 15.

The ED lodged the case against the senior Nationalist Congress Party leader based on the Central Bureau of Investigation (CBI) FIR arising out of Singh's letter to Chief Minister Uddhav Thackeray last March alleging that Deshmukh had ordered Vaze and others to 'collect' Rs 100 crore per month from Mumbai hoteliers. It further alleged that Deshmukh had received Rs 4.70 crore bribe in cash between December 2020-February 2021 through Vaze, which he had launched through paper companies and his trust.

(The above story first appeared on LatestLY on Nov 12, 2021 07:40 PM IST. For more news and updates on politics, world, sports, entertainment and lifestyle, log on to our website latestly.com).