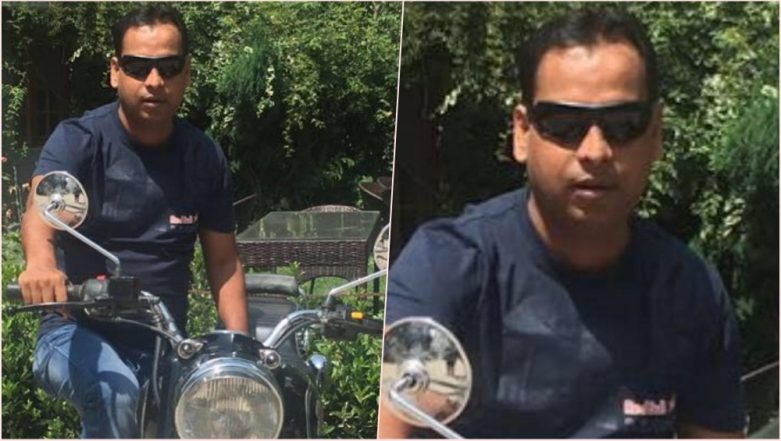 New Delhi, October 1: In a shocking revelation into the murder mystery of the Apple techie, a recent CCTV footage showing Vivek Tiwari’s car moving normally in Gomti Nagar locality surfaced has busted Uttar Pradesh cop's lie. According to footage by CNN News 18, Vivek’s car was seen plying normally on the road, while the cop stated that he fired at Tiwari's car in self-defence as it tried to run him over.

The CCTV Footage bursts cops’ claim of ‘suspicious movement’ and shows accused cops on bike minutes before the murder. The investigation into the murder of Tiwari, the Apple executive has raised questions regarding the lack of law and order in Uttar Pradesh.

Take a Look at the CCTV Footage:

#EXCLUSIVE – I’m satisfied with the investigation that is going on. I have faith in the administration and the people I’ve talked to: Kalpana Tiwari, Vivek Tiwari’s wife tells CNN-News18| #TriggerHappyCops pic.twitter.com/pef1lLCU3h

The cop, identified as Constable Prashant Chaudhary had said that after noticing some "suspicious activity", he asked the victim to come out of the SUV but he did not and instead tried to hit him and he had to open fire in self-defence.

#WATCH: Kalpana Tiwari, wife of Vivek Tiwari who was shot dead by a police constable in Gomti Nagar area on 29 September, says after meeting CM Yogi Adityanath, "I had earlier also said that I have faith in our state government and today that faith has further strengthened" pic.twitter.com/EkloDLhfIE

Kalpana Tiwari, Vivek Tiwari’s after meeting Chief Minister Yogi Adityanath in connection with the incident said her faith in the government has further strengthened. "I had earlier also said that I have faith in our state government and today that faith has further strengthened”, she said. Police informed that a fired bullet pierced the windscreen as the car rammed into a pillar. She added saying that Vivek spoke to her and said he is dropping Sana and coming home as her house in only at about 20 minutes of distance from their house. Vivek Tiwari Death: Uttar Pradesh Minister Rules Out Foul Play in 'Encounter', Says 'Criminals Will Be Punished'.

Meanwhile, UP Congress chief Raj Babbar also visited the victim's house Sunday and said, "You (CM) might be busy in the political management of the incident otherwise you should have come to meet daughters of the victim."

Vivek Tiwari was shot dead by a police constable in Gomti Nagar area on September 29 while he was going to drop his colleague Sana Khan. Vivek’s body was cremated on Sunday at Bhaisakund in present of state minister Brijesh Pathak and local MLA Ashutosh Tondon and others. The two constables Prashant Chowdhury and Sandeep Kumar were arrested and dismissed from the job and an FIR was registered in the matter on the basis of a complaint by Sana Khan. Uttar Pradesh Chief Minister Yogi Adityanath had Saturday said a CBI inquiry would be recommended if needed.